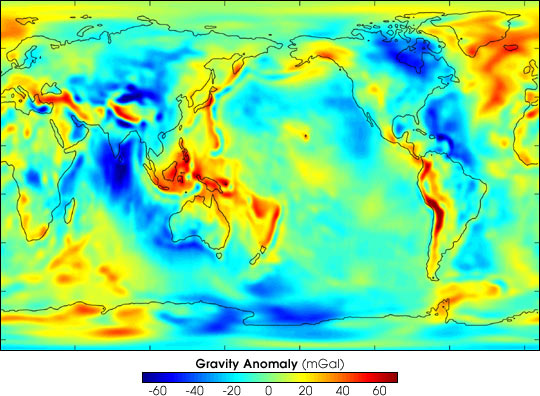 The joint NASA-German Aerospace Center Gravity Recovery and Climate Experiment (GRACE) mission has released its first science product, the most accurate map yet of Earth’s gravity field. GRACE is the newest tool for scientists working to unlock secrets of ocean circulation and its effects on climate.

Created from 111 days of selected GRACE data to help calibrate and validate the mission’s instruments, this preliminary model improves knowledge of the gravity field so much it is being released to oceanographers now, months in advance of the scheduled start of routine GRACE science operations. The data are expected to significantly improve our ability to understand ocean circulation, which strongly influences weather and climate.

Byron Tapley, GRACE principal investigator at the University of Texas’ Center for Space Research, called the new model a feast for oceanographers. “This initial model represents a major advancement in our knowledge of Earth’s gravity field,” Tapley said. “Pre-GRACE models contained such large errors, many important features were obscured. GRACE brings the true state of the oceans into much sharper focus so we can better see ocean phenomena that have a strong impact on atmospheric weather patterns, fisheries, and global climate change.”

GRACE is accomplishing that goal by providing a more precise definition of Earth’s geoid—an imaginary surface defined only by Earth’s gravity field, upon which Earth’s ocean surfaces would lie if not disturbed by other forces such as ocean currents, winds, and tides. The geoid height varies around the world by up to 200 meters (650 feet).

“I like to think of the geoid as science’s equivalent of a carpenter’s level. It tells us where horizontal is,” Tapley said. “GRACE will tell us the geoid with centimeter-level precision.”