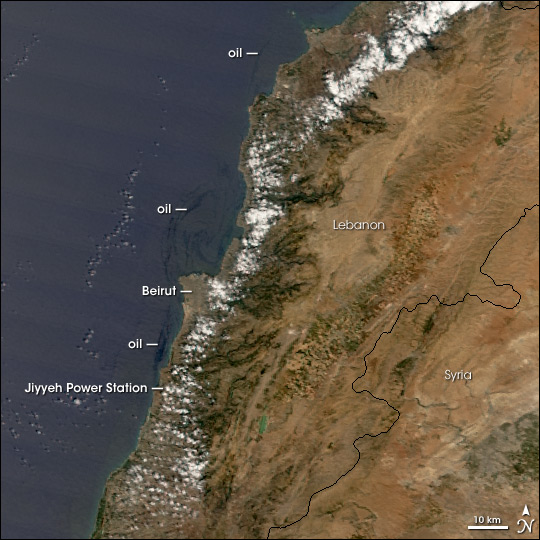 Among the casualties of the conflict between Lebanon and Israel in the summer of 2006 was the Mediterranean Sea. Damage to the Jiyyeh Power Station in Lebanon in mid-July released thousands of tons of oil along the Lebanese coast, perhaps rivaling the Exxon Valdez accident in 1989. By August 10, the spill covered approximately 120 kilometers (75 miles). The Moderate Resolution Imaging Spectroradiometer (MODIS) flying onboard NASA’s Terra satellite took this picture on August 15, 2006. The United Nations, the European Union, and the International Maritime Organization planned a meeting for August 17 to discuss cleanup operations, which had been delayed by the fighting between the neighboring countries.

This image shows Lebanon, its neighbor Syria, and the Mediterranean. Originating from the Jiyyeh Power Station, the oil slick spreads northward, well past the city of Beirut. The oil appears as a slightly darker shade of blue on the ocean water. Bright white clouds fringe the coastline, and the land area, though dotted with green, is largely brown and arid.

Oil spilled from the Jiyyeh Power Plant in Lebanon spread northward along the Mediterranean coastline in August 2006.