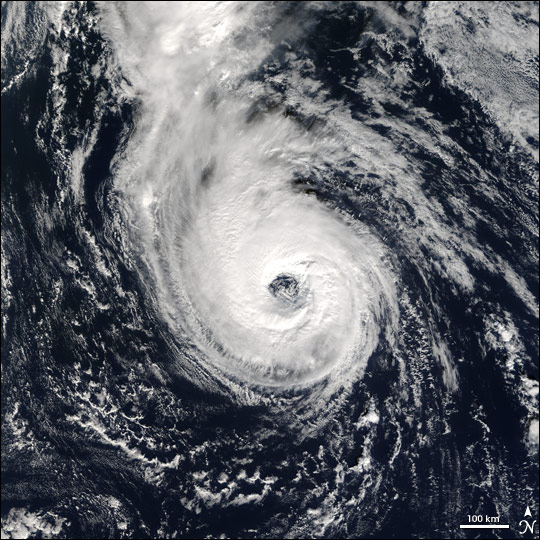 The official hurricane season in the Atlantic Ocean runs from June 1 to November 30 each year, but on very rare occasions, tropical storms and even hurricanes form outside the season. In 150 years of records, a hurricane has formed outside of the season on only four other occasions. But with so many records broken by the 2005 Atlantic hurricane season, it seems almost unsurprising to find Hurricane Epsilon ushering in December and bumping that out-of-season-hurricane record up to five storms. Epsilon formed in the Central Atlantic about halfway between the Azores Islands and Bermuda on November 29, 2005.

This image shows Hurricane Epsilon in the mid-Atlantic, as observed by the Moderate Resolution Imaging Spectroradiometer (MODIS) on the Terra satellite on December 4, 2005, at 13:30 UTC (10:30 a.m. local time). At that time, the hurricane had peak sustained winds of 140 kilometers per hour (85 miles per hour). That intensity appears to be the strongest the storm will achieve, according to forecasts from early on December 5, 2005. The storm had been sustaining winds from 120-140 kilometers per hour (75-85 mph) for roughly 48 hours at that time. This longevity ensures that Epsilon, despite having four other storms for company in the out-of-season-hurricane neighborhood, will nevertheless go down alone in the record books in at least one respect: it has broken a new record for the longest-lived December hurricane.