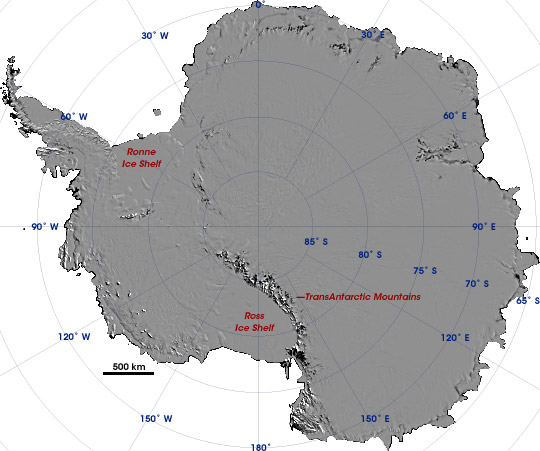 At the “bottom” of the globe lies the coldest, windiest, and driest place on Earth: Antarctica. All but about 2 percent of the 14 million-square-kilometer (5.4 million-square-mile) land surface is covered with ice sheets; bare rock is exposed in places along rocky coastlines and steep mountain slopes. In such a hostile environment, on-the-ground observations are scarce. Satellite data are invaluable for studying biological and physical processes—including climate change—on and around Antarctica.

This image is a small version of a map of Antarctica that scientists compiled from hundreds of images collected by the Moderate Resolution Imaging Spectroradiometer (MODIS) sensors on NASA’s Terra and Aqua satellites. The final product is the most detailed picture of the surface of the southernmost continent created to date, revealing details such as crevasses, ice sheet flow lines, melt ponds, and “blue ice,” areas of exposed ice swept free of snow by persistent winds.

Like liquid water, glaciers and ice sheets flow downhill under the influence of gravity. On Antarctica, the average elevation is 2,300 meters (7, 544 feet) above sea level, and glaciers flow seaward from these heights, extending into the Southern Ocean as floating ice shelves. The two largest are the Ross Ice Shelf and the Ronne Ice Shelf. Both these ice shelves occur west of the Transantarctic Mountains, which divide the continent into two geographic regions: East and West Antarctica. Many smaller ice shelves fringe the coastline of East Antarctica.

To read more about how scientists from the National Snow and Ice Data Center at the University of Colorado and the University of New Hampshire created this map and to see additional images, please read the Earth Observatory feature article “Mosaic of Antarctica.”

Image courtesy the National Snow and Ice Data Center, based on data from NASA’s Aqua and Terra MODIS sensors.