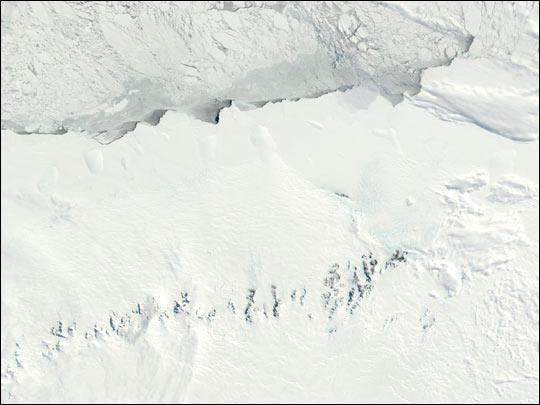 The continent of Antarctica is almost completely covered by a thick blanket of ice, punctuated only by steep mountain peaks and a handful of dry valleys. Antarctica is also ringed by a permanent ice shelf, and that is surrounded by seasonal sea ice.

The image above, acquired by the Moderate-resolution Imaging Spectroradiometer (MODIS) on September 26, 2001, shows many of the types of ice found in Antarctica. At the bottom of the image is the ice of the continental glacier, which is up to 4,000 meters thick in the interior. These thick glaciers are held in place by coastal mountain ranges. Some ice does flow through the mountains, spilling onto the relatively flat land of the Princess Astrid Coast. Cold air also spills over the mountains, creating very strong and persistent “katabatic” winds. These scour the snow off the tops of the glaciers, leaving pale blue patches of bare ice. Above the coastline is the ice shelf, which is much smoother. There, glacial ice actually floats on the sea surface. Beyond that is the chaotic surface of the sea ice, which has been solidifying all winter long.