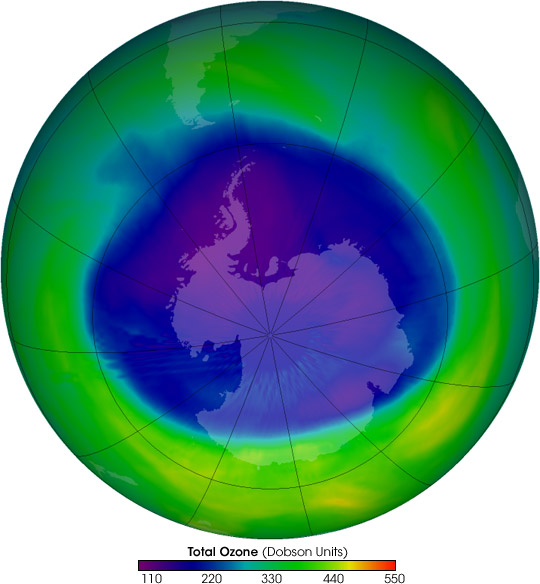 The year 2005 marks the twentieth anniversary of the discovery of the ozone hole and the first full year that NASA’s Aura satellite has provided detailed images of the hole. Aura was launched in 2004 to monitor the Earth’s atmosphere, including the health of the delicate ozone layer. The Ozone Monitoring Instrument on Aura collected the data used to create this image on September 11, 2005, when the ozone hole covered 27 million square kilometers—its peak size for the season. Deep blue shows where ozone levels were low enough to be considered part of the ozone hole. New research shows that the ozone layer may be slower in recovering than previously thought.

Ozone is a highly reactive colorless gas that contains three oxygen atoms. Near the surface of the Earth, ozone is hazardous to human health, causing problems like lung irritation, but high in the atmosphere, ozone acts as a crucial shield that absorbs harmful ultraviolet radiation from the Sun. The ozone hole is not an actual hole, but a place in the atmosphere where the protective layer of ozone has worn thin.

In 1985, Joseph Farman, Brian Gardiner, and Jonathan Shanklin discovered in the ozone hole over Antarctica. In the following two years, scientists confirmed that human-produced chemicals, chlorofluorocarbons, used in refrigeration and propellant devices, were causing the hole. Chlorofluorocarbons contain high levels of chlorine, which breaks free from the larger molecules in the bitter cold and darkness of Antarctic and Arctic winter. Through a series of chemical reactions, the free chlorine becomes a two-atom molecule of chlorine gas. When sunlight returns, the chlorine gas disintegrates into separate chlorine atoms, which catalyze the destruction of atmospheric ozone.

Though the production of chlorofluorocarbons was restricted in 1987, reservoirs of the chemicals in existing refrigerators and air conditioners are still emitting ozone-depleting chemicals into the atmosphere at higher levels than predicted, new measurements show. The extra chemicals may delay the recovery of the ozone hole until about 2065. Previous models predicted a recovery of the ozone layer by 2050. These results were announced on December 6, 2005, at the fall meeting of the American Geophysical Union. To read more, see Ozone Hole: Prospects for Recovery on the NASA Goddard News web page.

To read more about the ozone hole and NASA’s mission to study it, check out Ozone Hole Watch. The site also contains daily images of the ozone hole as measured by Aura’s Ozone Monitoring Instrument.