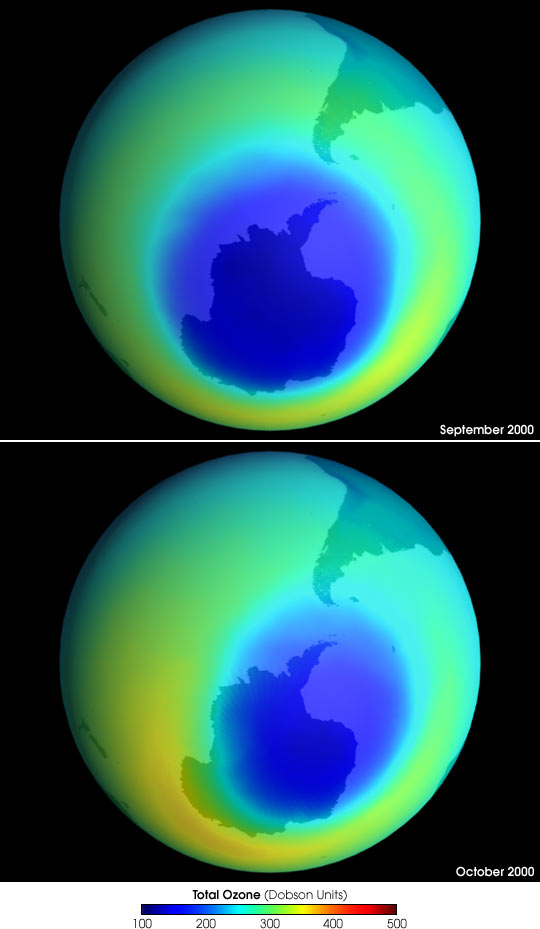 Each spring the ozone layer over Antarctica nearly disappears, forming a “hole” over the entire continent. The hole is created by the interaction of some man-made chemicals—freon, for example—with Antarctica’s unique weather patterns and extremely cold temperatures. Ozone in the stratosphere absorbs ultraviolet radiation from the sun, thereby protecting living things. Since the ozone hole was discovered many of the chemicals that destroy ozone have been banned, but they will remain in the atmosphere for decades.

In 2000, the ozone hole grew quicker than usual and exceptionally large. By the first week in September the hole was the largest ever—11.4 million square miles. The top image shows the average total column ozone values over Antarctica for September 2000. (Total column ozone is the amount of ozone from the ground to the top of the atmosphere. A relatively typical measurement of 300 Dobson Units is equivalent to a layer of ozone 0.12 inches thick on the Earth’s surface. Levels below 220 Dobson Units are considered to be significant ozone depletion.) The record-breaking hole is likely the result of lower than average ozone levels during the Antarctic fall and winter, and exceptionally cold temperatures. In October, however (bottom image), the hole shrank dramatically, much more quickly than usual. By the end of October, the hole was only one-third of it’s previous size. In a typical year, the ozone hole does not collapse until the end of November. NASA scientists were surprised by this early shrinking and speculate it is related to the region’s weather.