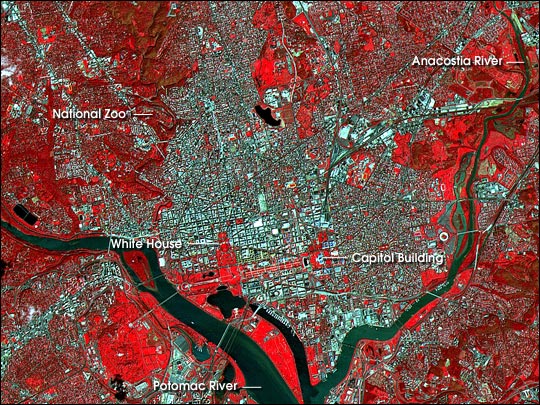 Citizens of the United States vote today (November 7, 2000) to determine who will be the next president and vice president of the country, as well as who will fill a number of congressional and senate seats that are up for election. This image of the U.S. capital city—Washington, D.C.—was acquired on June 1 by the Advanced Spaceborne Thermal Emission and Reflection Radiometer (ASTER), a Japanese sensor flying aboard NASA’s Terra spacecraft.

The scene encompasses an area 14 km wide by 13.7 km tall, and was made using a combination of ASTER’s visible and near-infrared channels. In this image, vegetation appears red, buildings and paved areas appear light blue, and the waters of the Anacostia and Potomac Rivers are dark grey. ASTER’s 15-meter spatial resolution allows us to see individual buildings, including the White House, the Jefferson Memorial, and the Washington Monument with its shadow.