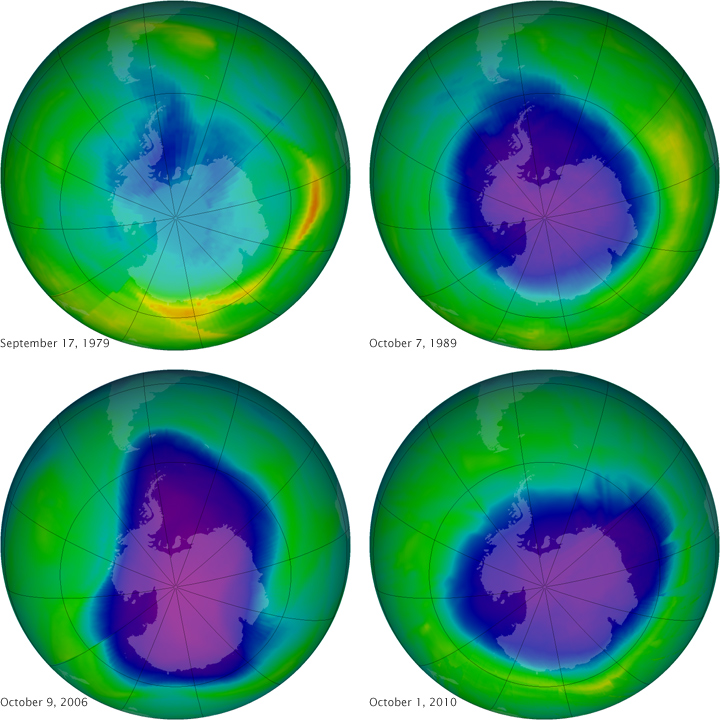 Ozone is Earth's natural sunscreen, shielding life from excessive amounts of ultraviolet radiation. But Earth's ozone layer has been damaged by well-intentioned chemicals—chlorofluorocarbons, used for refrigerants and aerosol spray-cans—that have the unintended consequence of destroying ozone molecules.

In the late 1980s, governments around the world woke up to the destruction of the ozone layer and negotiated the Montreal Protocol, an international treaty to phase out ozone-depleting chemicals. The treaty included a requirement that scientists regularly assess and report on the health of the ozone layer, particularly the annual Antarctic ozone hole. In January 2011, the Ozone Secretariat of the United Nations Environment Programme released its latest report and noted that the Protocol has “protected the stratospheric ozone layer from much higher levels of depletion...[and] provided substantial co-benefits by reducing climate change.”

This series of images above shows the Antarctic ozone hole on the day of its maximum depletion in four different years; that is, the days with the thinnest ozone layer as measured in Dobson Units (DU). The measurements were made by NASA’s Total Ozone Mapping Spectrometer (TOMS) instruments from 1979â€“2003 and by the Royal Netherlands Meteorological Institute (KNMI) Ozone Monitoring Instrument (OMI) from 2004â€“present. Purple and dark blue areas are part of the ozone hole.

In their 2010 report, the science advisers to the Montreal Protocol found that: