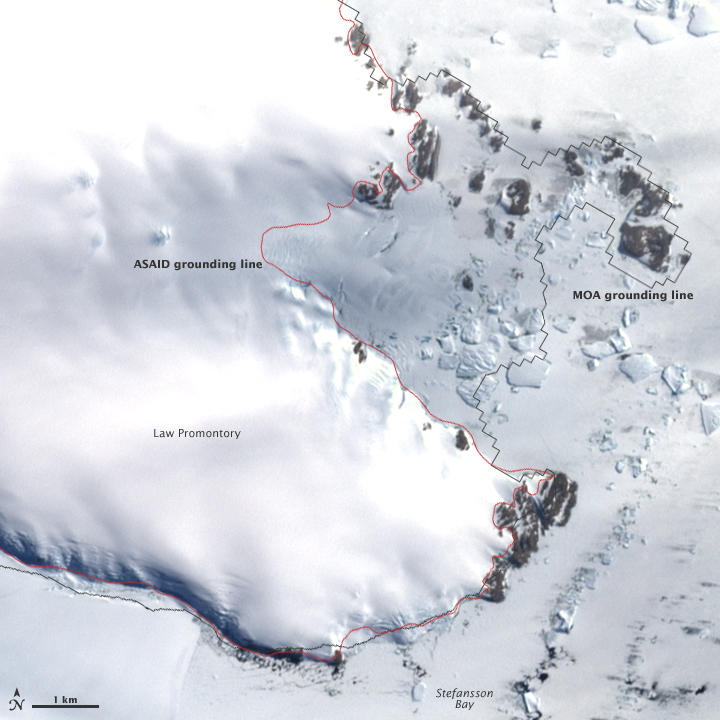 Antarctica is covered by the world’s largest ice sheet, and it is losing mass. At present, ice is slipping into the sea from the continent’s icy edge more quickly than snowfall is accumulating in the high-altitude interior. The imbalance means that Antarctic ice loss is contributing to rising sea level. To keep track of Antarctic ice losses and gains, scientists need an accurate picture of the ice perimeter.

This image includes a tiny portion of a new map of the Antarctic ice edge; it shows the area around Law Promontory, which juts out from East Antarctica’s coastline near Stefansson Bay. In places where ice extends beyond the edge of the continent, the map shows the grounding line—the point where the ice sheet separates from land and begins to float on the ocean. The colored lines show the ice edge/grounding line based on the latest analysis (red) as well as the previous best estimate (gray line), which was based on the Mosaic of Antarctica (MOA). The ice edge is overlaid on a natural-color image from the Landsat satellite captured on January 29, 2010.

The new map is the result of an international effort called the Antarctic Surface Accumulation and Ice Discharge (ASAID) project. Led by Robert Bindschadler of NASA’s Goddard Space Flight Center, the collaborators used data and images from multiple sources—including images from Landsat 7 and the LIMA mosaic, precise elevation data from ICESat, and grounding line estimates from earlier studies—to create the most detailed map yet produced.

The dramatic improvement provided by the new map is most apparent around the rocky outcrops off the coast; smatterings of ice-encased islands are a common occurrence around Antarctica. The earlier mapping effort had included the rocky outcrops and sometimes icebergs as part of the ice sheet perimeter, but elevation data and interpretation based on higher-resolution (more detailed) imagery enabled the researchers to identify the ice perimeter more accurately. To complete its map, the team connected 3.5 million geographic points around Antarctica. The team identified a perimeter for Antarctica’s ice of roughly 53,610 kilometers (33,312 miles).

Determining the perimeter of Antarctica’s ice sheet is not simply an academic exercise. NASA satellites have observed significant ice loss in Antarctica, especially along the Antarctic Peninsula, but quantifying that loss has been difficult. Although scientists calculated the flow speed of 33 of the continent’s biggest glaciers, such outflow glaciers occupy just 5 percent of the coastline, and account for only half of the lost ice. Ice can migrate from land to sea by other means than the biggest glaciers. Ice shelves can collapse, icebergs can calve off thin ice tongues, and chunks of ice may slide over the edges of precipices.

By providing a precise map of Antarctica’s ice perimeter, ASAID promises to improve estimates of ice loss. Bindschadler remarks, “This project has been a major achievement to come from the International Polar Year. This project included young scientists, it was an international effort, and it produced freely available data—all from satellites.”

Ted Scambos of the National Snow and Ice Data Center observes, “ASAID doesn’t just show the location of the ice edge, it provides the elevation all along that line. That’s a key step in measuring mass balance because it tells you the ice thickness near the grounding line.”