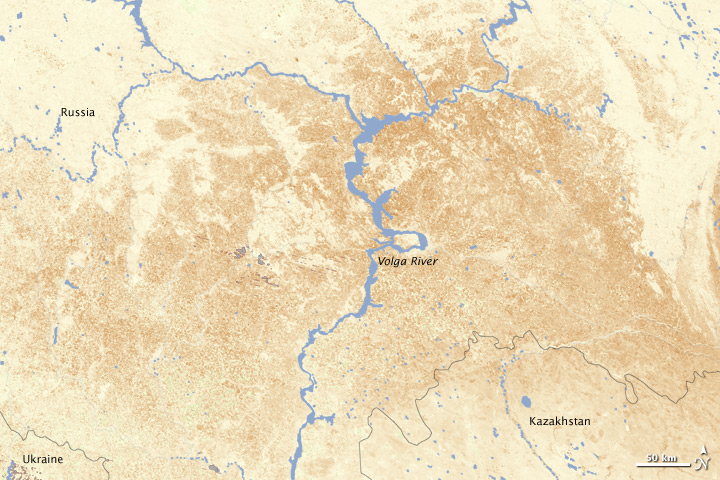 The vegetation index is a reflection of photosynthesis. The index is high in areas where plants are dense, with plenty of photosynthesizing leaves. The index is low when plants are thin or not present. This image is a vegetation index anomaly image that compares photosynthesis between June 26 and July 11, 2010, to average conditions observed in late June and early July between 2000 and 2009. Below-average plant growth is shown in brown, while average growth is cream-colored. If there had been above-average growth in the region, it would have been represented in green.

The land around the Volga River is brown in this image. Plants throughout the region were stressed, producing fewer leaves and photosynthesizing less between June 26 and July 11, 2010. The image is speckled brown. In the large image, which covers a broader region in more detail than the web image, the dots are clearly fields of crops. Here, the dots blend together to reveal a broad region of drought-affected crops.

The Volga region is one of Russia’s primary spring wheat-growing areas. The vegetation index values shown here were the lowest late-June values seen in Russia’s spring wheat zone since the MODIS sensor began taking measurements in 2000, said an analyst from the United States Department of Agriculture (USDA) Foreign Agricultural Service. Largely as a result of the drought, the USDA expected Russia’s overall wheat crop to be 14 percent smaller than in 2009.

The drought affects more than Russian farmers. Russia is the world’s fourth largest wheat exporter. If Russia isn’t able to supply as much wheat, the world’s overall wheat supply will drop. With less wheat on the market, wheat prices will go up. As of July 23, wheat futures (the current price for wheat that will be harvested and delivered in September) had risen for four consecutive weeks because of the expected drop in supply of Russian wheat, reported Bloomberg.