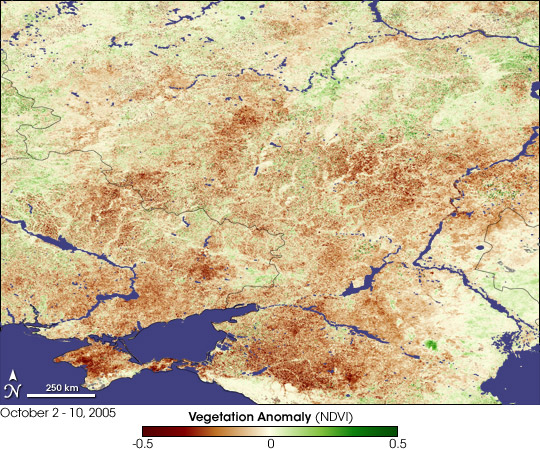 Flat, fertile plains stretch northward from the Black Sea in Ukraine and southern Russia. With a climate similar to that of Kansas, roughly two-thirds of the Ukraine is agricultural land. The main crops in the region are wheat, barley, and corn. Most wheat (about 95 percent) is planted in the late fall and harvested in July and August of the following year. Across the border in southern Russia, winter wheat is similarly important. As the wheat grows, farmers rely on rain to nourish the developing plants.

In 2005, however, farmers faced a problem. As of September 29, little or no rain had fallen over the region since mid-August. Without rain, farmers could not plant on time. Those who did plant faced the prospect of a poor crop unless rain began to fall.

The effects of dry conditions on plants across Ukraine and southern Russia are shown in this vegetation image, made from data acquired by the Moderate Resolution Imaging Spectroradiometer (MODIS) between October 2 and October 10, 2005. Dry areas are shown in brown, while normal conditions are tan, and better-than-normal conditions are green. The drought seems to be particularly bad on Crimea, the island-like peninsula in the Black Sea, and in Russia to its east, where deep red points to very stressed vegetation.

The vegetation index is a measure of the amount of light absorbed by plants over a large area during photosynthesis. When crops are healthy, they produce more leaves and, as a result, absorb more light in photosynthesis. When they are stressed by drought, crops produce fewer leaves and absorb less light. In this image, the vegetation index was compared to the average of measurements made during the same period in 2001-2004. The resulting image shows that plants are significantly more stressed in 2005 than they were during this period in the previous four years.

Drought stressed major agricultural areas in the southeastern corner of the Russian Federation and throughout Ukraine.