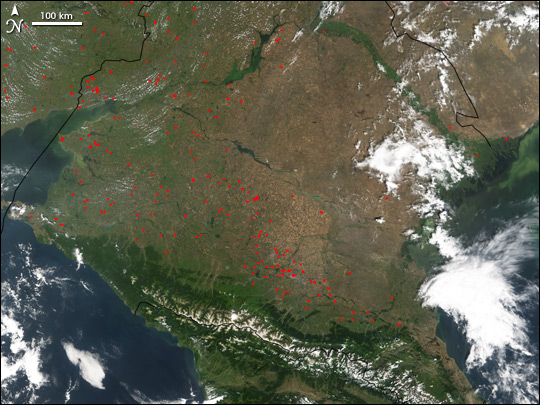 Between the Black Sea on the west and the Caspian Sea on the east lies Russia’s Southern Agricultural District. The region is one of the major winter grain-producing areas in the country. Winter wheat and barley are planted in the fall and harvested in the summer, usually beginning in June and ending by mid-August at the latest. The fires (red dots) seen in this Moderate Resolution Imaging Spectroradiometer (MODIS) image captured by the Terra satellite on July 24, 2005, are probably related to the harvest. For example, farmers may be burning the crop stubble off recently harvested fields in anticipation of the next sowing. The Production Estimates and Crop Assessment Division of the U.S.D.A. Foreign Agricultural Service offers more information about agriculture in Russia.

Winter lingered to the north, but in west-central Russia, spring burning was underway on April 24, 2009.