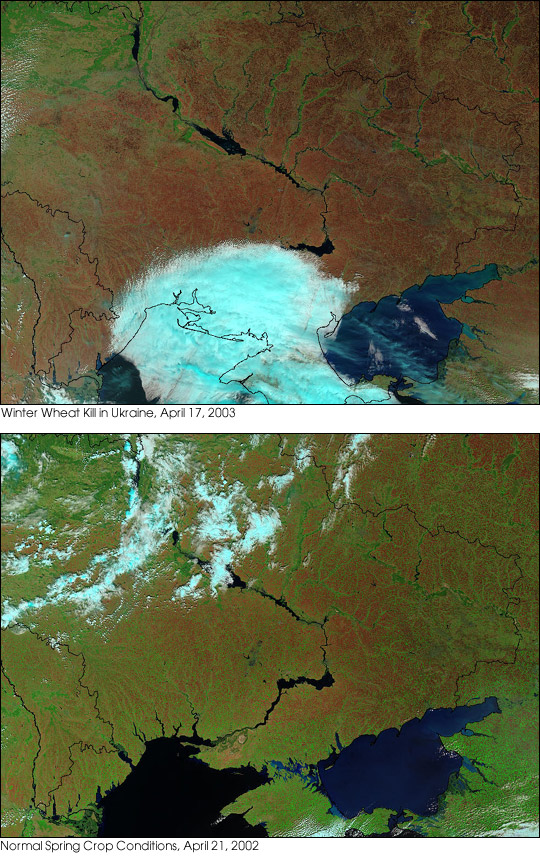 Severe ice crusting during February and March 2003 smothered both winter grains and alfalfa fields throughout central and southern Ukraine. Approximately 50 percent of Ukraine’s winter wheat perished over the winter, including nearly 90 percent in the Dnipropetrovsk region, which is one of Ukraine’s top grain producing regions. The ice also destroyed 90 percent of the barley crop, and 30 percent of the rye crop.

The difference between a normal year of winter crop production and this spring’s devastating losses is shown in the pair of images of above, captured on April 17, 2003 (top), and April 21, 2002 (bottom), by the Moderate Resolution Imaging Spectroradiometer (MODIS) aboard NASA’s Terra spacecraft. The false-color composite shows vegetation as green, bare ground as brownish-red, clouds as light blue, and water as black or dark blue.

Bare soil dominates this year’s image, with most of the Ukraine (center), southwestern Russia (right), and Moldova (southwest of Ukraine) swathed in deep reddish brown. Slim ribbons of green vegetation line the small rivers feeding into the Dnieper River (center), and in the upper left corner, the Pripet Marshes appear green as well. At bottom center is the northern part of the Black Sea, with the Sea of Azov to the northeast. The Russian landscape to the east of the Sea of Azov had dramatically less vegetation this spring than last.

According to statistics from the USDA Foreign Agricultural Service, this year’s winterkill in Ukraine was the worst in recent history (see graph). The wheat production estimate of 9.5 million tons put out in May by the Production Estimates and Crop Assessment Division (PECAD) of the Foreign Agricultural Service was the lowest in 40 years. Read more about the crop damage in an article by PECAD.