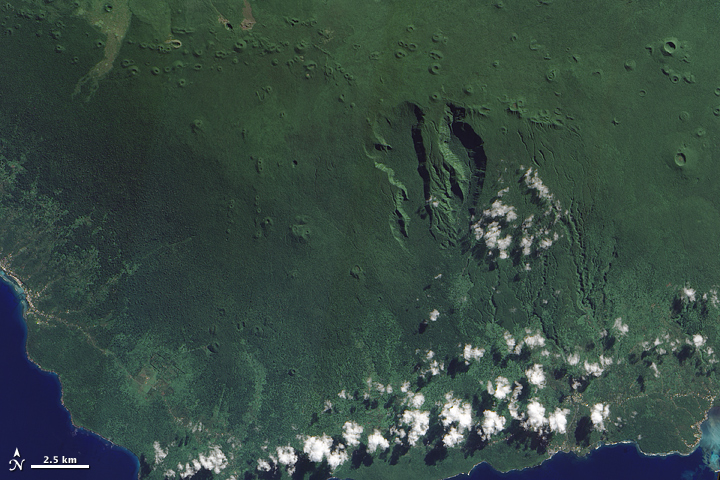 At the western end of the Samoan Island chain lies Savai’i. Stretching over 649 square miles (1,682 square kilometers), Savai’i is one of the largest landmasses in Polynesia. The mountainous island is a shield volcano that reaches its highest altitude—6,095 feet (1,858 meters)—near the center of the island. The region’s tropical, humid climate sustains vegetation that carpets much of the island.

Sparse cloud cover allowed the Advanced Land Imager (ALI) on NASA’s Earth Observing-1 (EO-1) satellite a clear view of south-central Savai’i on July 1, 2010. A jagged line of small, round volcanic craters extends east-west across the island. South of this uneven line, two deep, parallel valleys extend toward the south. The semicircular contours of the valleys suggest that they might be the remains of an ancient caldera or collapsed magma chamber that was modified by the later eruption of additional lava.

With the exception of a few brown crater rims, and a coastal settlement along the image’s left edge, the landscape appears in varying shades of green. Dense rainforests cover the island’s rugged interior, and thick vegetation also thrives along the coastal plains. Rivers and streams carve their way to the coast, fed by regular rains. Precipitation on Savai’i is especially heavy from November to April. Scratching below the vegetated surface, however, leads to equally interesting rocks.

Savai’i’s rocks have long puzzled geologists. A possible explanation for the island’s formation is a stationary hotspot. Geologists surmised that Samoa’s islands were older to the west, having passed over the hotspot earlier. On the western end of the island chain, Savai’i should have been about 5 million years old, but some volcanic rocks sampled there had indicated a much younger age, perhaps as young as 400,000 years. A study published in 2008, however, dated rocks from multiple locations deep within the island flanks and found them to be several million years old. The exact causes of Savai’i’s formation remains an area of active research.