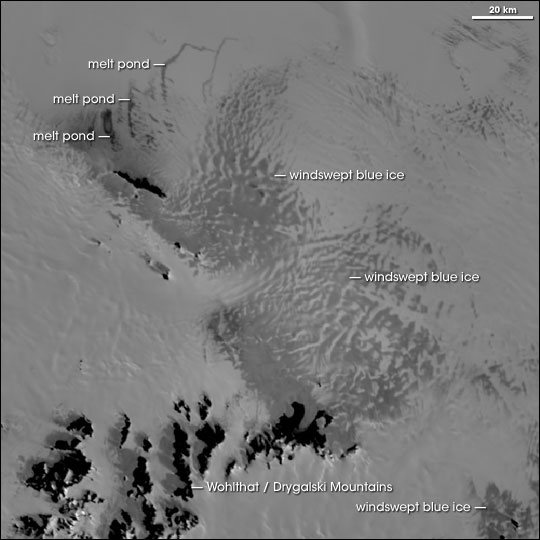 Released in the fall of 2005, the MODIS Mosaic of Antarctica (MOA) has offered a new view of the frozen continent with unprecedented detail. The map is compiled from 260 images of Antarctica acquired by the Moderate Resolution Imaging Spectroradiometer (MODIS) sensors on NASA’s Terra and Aqua satellites. Using images collected between November 20, 2003, and February 29, 2004, MOA includes all land areas covered by the Antarctic Treaty. This MOA image shows part of the Princess Astrid Ice Shelf. Prominent on this ice shelf are features that glaciologists often study in Antarctica: blue ice and melt ponds.

Snow is composed of tiny ice crystals with many facets that reflect light like a mirror. Light shining into snow is bounced back largely unaltered, so snow appears white. Over time, however, compressed layers of snow turn to ice, and wind can expose this ice by sweeping away or evaporating lighter layers of snow. Compressed ice has big, clear crystals that allow light to travel through more of the ice before reflecting back. Ice absorbs a tiny amount of red light from the spectrum, so the light coming out of the ice appears blue to human eyes. Although MOA imagery is grayscale, blue ice nevertheless has a unique appearance in the imagery. In this image, windswept blue ice appears as swirling patchwork patterns of dark gray.

Melt ponds also appear in this image, showing up as curving lines of charcoal gray. Melt ponds have attracted the scrutiny of glaciologists because of the effects they have on ice shelves and glaciers. Warm summers can cause ponds of melt water to collect on the ice surface, and these ponds may eventually fill small cracks in the ice. Depending on the depth of a crack and the amount of water filling it, the water may deepen the crack, eventually carving all the way through the thick plate of ice. On a glacier, melt ponds can lead to water flow on the glacier’s underside, loosening it from the bedrock and accelerating flow. On an ice shelf, melt ponds can lead to ice shelf disintegration.

Image courtesy the National Snow and Ice Data Center, based on data from NASA’s Aqua and Terra MODIS sensors.