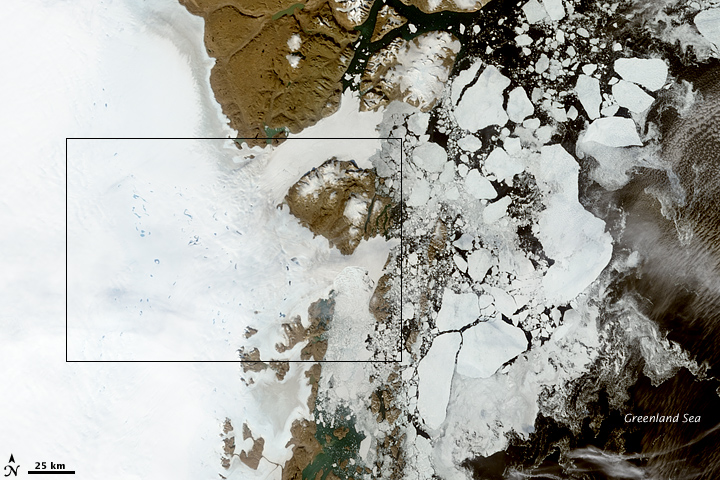 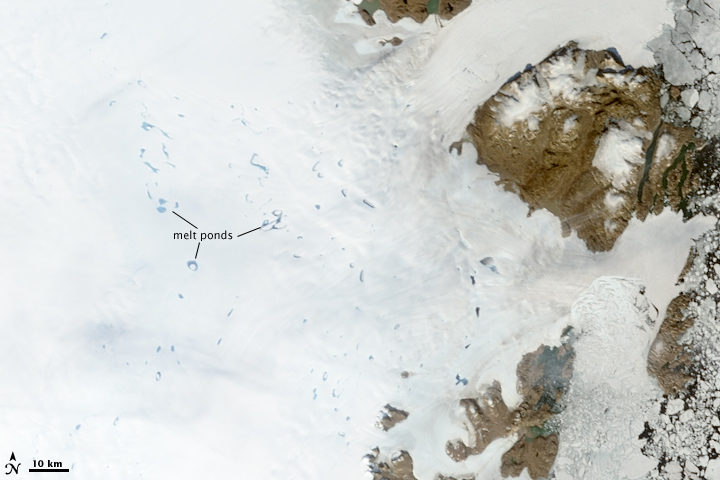 Glaciologists have long been fascinated with the complex terrain of ice sheets, massive bodies of land-based ice in Greenland and Antarctica. In the past decade, ice sheet studies have increasingly focused on the likelihood that climate-induced changes in ice sheets could raise sea level—eventually forcing millions of coastal residents to relocate. To understand ice sheets, glaciologists venture both below the surface with ice cores, and into the sky with satellites.

The Moderate Resolution Imaging Spectroradiometer (MODIS) on NASA’s Terra satellite captured this image of the Greenland Ice Sheet August 30, 2008. Taken over northeastern Greenland, the top image shows (left to right) the eastern margin of the ice sheet, bare rocks of the coastline, and fragments of sea ice floating on the ocean surface. The black rectangle indicates the detailed view that is shown in the bottom image. In both the wide-area and zoomed views, the ice sheet margin appears pale blue-gray, which may be a sign it is saturated with water. Deeper blue pools of standing melt water dot the ice sheet’s surface.

Melt ponds have played a role in the breakup of the Larsen Ice Shelf on the Antarctic Peninsula, where dense pools of water sliced through sections of the shelf like a wedge. In Greenland, melt ponds ultimately find their way into crevasses or moulins—chutes that carry melt water through the ice sheet. Many glaciologists suspect that the melt water finds its way to the bottom of the ice sheet where it lubricates the base of the ice, reducing friction between the ice and the underlying rock, and speeding glacier flow. As the glacier accelerates, it pushes ice into the ocean. This introduction of additional ice into the ocean can raise sea level, just as dropping extra ice cubes into a glass raises the level of a drink.

Robert Bindschadler, Chief Scientist at the Hydrospheric and Biospheric Sciences Laboratory at NASA’s Goddard Space Flight Center, discussed the interplay of melt ponds, ice sheets, and sea level in an interview with the radio program Earth and Sky. A podcast of the interview is available online.