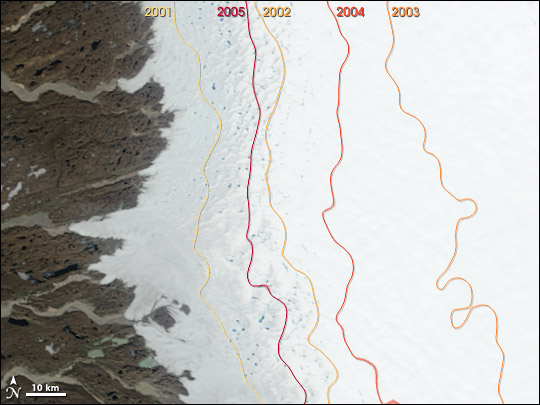 The Greenland ice sheet experienced record melting in September 2002, as did much of the Arctic. A comparison of images from 2001 through 2003 and 2004 shows the changes in Greenland’s ice sheet over the past few years.

In this image, the melt zone appears along the western edge of the ice. In this zone, water has saturated the ice, darkening its color from white to blue-gray. The colored lines indicate the approximate melt zone extents for June 2001 through June 2005. Between June 2001 and June 2003, the melt zone increased substantially, then shrank somewhat in June 2004. The melt zone for June 2005 appears roughly equivalent to that of June 2002, the same year that later set a record in Greenland Ice Sheet melting. These images show the Greenland Ice Sheet midway through the seasonal melt. Summer melting generally extends from the spring through the early fall.

As in previous years, blue melt ponds liberally dot the surface. Though they may look pretty, too many ponds spell trouble for the ice sheet. These ponds serve as reservoirs of water that can speed the ice’s journey to the sea. Melt water travels downward through the ice and once it reaches the bottom, it can loosen the bond between the ice and the underlying rock, quickening the ice flow.

Jay Zwally of NASA’s Goddard Space Flight Center, and Konrad Steffen of the University of Colorado’s Cooperative Institute for Research in Environmental Sciences, have both studied the effects of warming climate on the Greenland Ice Sheet for years. In 2002, they reported that melt water can rapidly make its way through glacial ice even when the temperature of that ice is well below freezing. Similar processes are at work on some Antarctic glaciers.