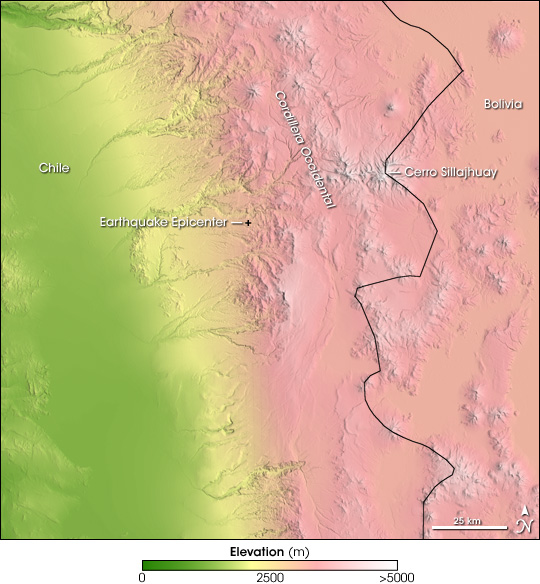 A 7.8 earthquake rattled northern Chile on June 13, 2005, at 6:44 p.m. local time, killing 11 and leaving hundreds homeless, according to the Associated Press. The large quake shook much of South America and was felt in Brasilia, Brazil, approximately 2,400 kilometers to the east and in Santiago, Chile, 1,515 kilometers to the south. The most damage occurred near the earthquake's center in the rural, mountainous section of the Tarapaca Province, where the shaking triggered landslides and flattened houses.

This topographical image of northern Chile shows the geology that produced this earthquake. The center of the earthquake is represented with a plus sign in the image. To the east, pink represents the higher elevation of the mountains, with the highest peaks tipped in white. Among the tallest is the 5,995-meter-high Cerro Sillajhuay on the border with Bolivia. The steeply changing elevation and folds in the land around the earthquake's center make it easy to see why the earthquake caused landslides. To the west of the center, the land gradually flattens into the flat Pampa del Tamarugal, a broad green ribbon of low-elevation land.

Far to the west of the region shown here, the Nazca Plate (a section of the Earth's crust that carries part of the Pacific Ocean) pushes steadily under the South American Plate, pushing up the Andes Mountains along the western edge of South America. Earthquakes happen frequently where sections of the Earth's crust collide, and Chile is particularly prone to geologic activity. The same conditions that give rise to earthquakes have also produced some 620 volcanoes throughout the country. The June 13 earthquake occurred east of the plate's surface boundary, near the base of the Cordillera Occidental, a range of the Andes. The quake was centered deep in the Earth, 119 kilometers (74 miles) from the surface, where the land is being forced up by the now subducted Nazca Plate.

This topographical image was created using data from the Shuttle Radar Topography Mission (SRTM). SRTM was designed to collect three-dimensional measurements of the Earth's surface using a radar instrument that flew aboard the Space Shuttle Endeavour in February 2000.