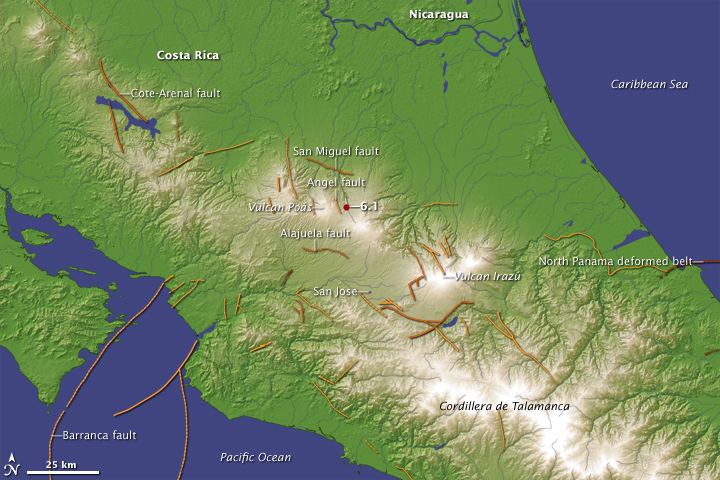 A magnitude 6.1 earthquake caused at least 20 deaths in Costa Rica on January 8, 2009, said the U.S. Geological Survey (USGS). The earthquake was centered 30 kilometers north of San Jose (the country’s capital) and just 4.5 kilometers (2.8 miles) below the surface, a depth shallow enough to ensure strong shaking at the surface. The quake damaged buildings and sent earth tumbling in the mountainous Central American country. Landslides caused the majority of the deaths, said the USGS.

Costa Rica is prone to geologic hazards. As this image shows, active volcanoes dot the small country, and faults, both active and ancient, weave through the country. The January 8 earthquake was centered near two very active volcanoes, Poás and Irazú. Several faults also line the land near the epicenter. The darker colored faults have caused earthquakes during the historic record. The lighter colored faults have not been recently active. Further evidence of geologic activity lies in the high mountain range, the Cordillera de Talamanca, that runs parallel to the coast.