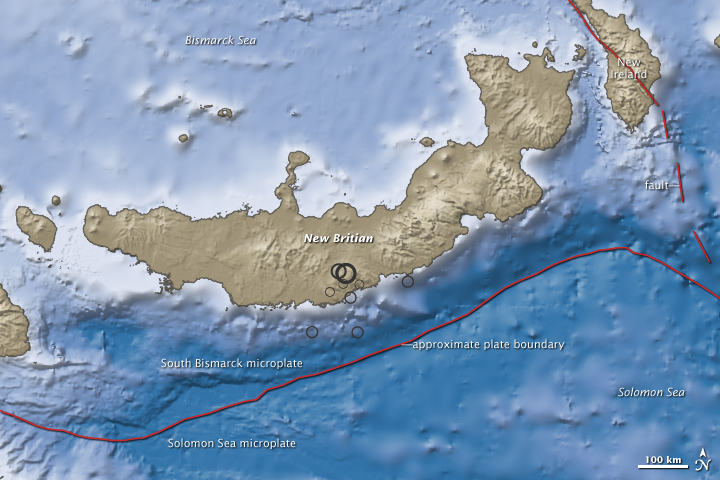 Multiple earthquakes occurred in the region of Papua New Guinea’s New Britain on July 18–19, 2010, according to the U.S. Geological Survey (USGS). The two largest quakes had magnitudes of 7.3 and 6.9. This color-coded map shows the topography, bathymetry, fault lines, and earthquake locations for the region.

In water and on land, colors lighten with height, so shallow depths and high peaks are pale. Faults and approximate plate boundaries appear as red lines. Circles indicate earthquakes, and larger circles with thicker borders indicate greater magnitudes. The two largest quakes appear very close to each other.

The USGS reported that the 7.3 quake occurred roughly 10 kilometers (6 miles) to the north and 30 minutes after a 6.9-magnitude quake. The foreshock occurred at a greater depth and resulted from reverse faulting. The USGS indicated that the 6.9 quake likely occurred within the subducting Solomon Sea Plate.

The New Britain region is seismically active and experiences both earthquakes and frequent volcanic activity.