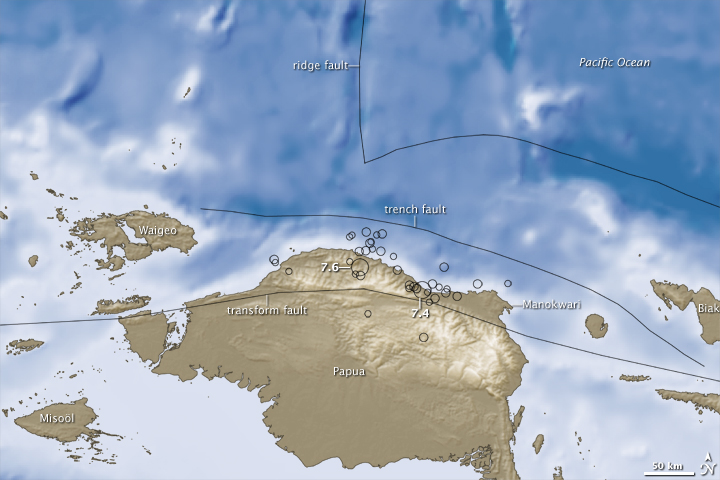 In the early morning hours of January 4, 2009, a pair of powerful earthquakes rattled Papua, Indonesia. The first earthquake, a magnitude 7.6 event, hit at 4:43 a.m., local time. The second, a 7.4 magnitude quake, followed at 7:33 a.m. The earthquakes damaged more than 800 buildings in Manokwari, the city nearest their epicenters, said the United Nations Office for the Coordination of Humanitarian Affairs on January 5. Five people died and approximately 250 were injured during the quakes, reported the UN.

The locations of the two earthquakes and the cluster of smaller associated quakes are illustrated in this image, which shows the topography of the island and the nearby seafloor. The region is geologically complex, says the U.S. Geological Survey (USGS), and that complexity is reflected in the image. On a large scale, the slab of Earth’s crust that contains the Pacific Ocean is moving southwest into the plate that carries Australia and Papua at a rate of about 112 millimeters per year, says the USGS. The Pacific plate slips under the Australia plate, creating a series of deep trenches on the sea floor where the plates meet.

The January 4 earthquakes, said the USGS, occurred in the region where the Pacific plate sinks below the Australia plate—a subduction zone. The subduction zone in this region is defined by the deep New Guinea trench north of Papua. The trench is the line of dark blue north of the earthquakes’ epicenters, where the depth of the ocean plummets. Though the earthquakes did not occur on the trench fault, they were likely associated with the large-scale motion of the Pacific plate sinking beneath the Australia plate, said the USGS.

More of the geologic complexity of the region is illustrated by the transform fault immediately south of the earthquake zone. A transform fault is a fracture in the Earth’s surface that forms along the edge of two plates moving horizontally past one another. The San Andres fault in California is probably the most famous transform fault. Papua’s transform fault is visible in the topography of the island. Since one side of the fault is higher than the other, a ridge line defines the fault.

If the Pacific plate is moving under the Australia plate, why is there a transform fault? In reality, the boundary between the two plates consists of a number of smaller plates that accommodate the motion of the larger plates. The smaller plates move more or less in concert with the larger plates, but create a messy mishmash of geologic structures associated with a variety of tectonic motions. The Papua region is a jigsaw of underwater trenches, ridges, and fault lines.