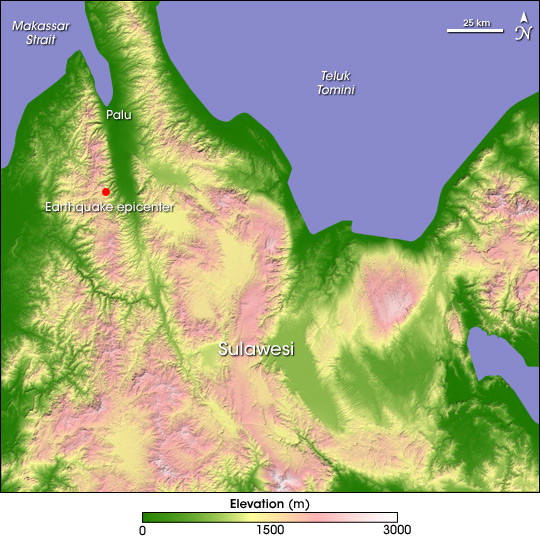 In the quiet of the earliest hours of the morning on January 24, 2005, a magnitude 6.2 earthquake rattled Palu, Sulawesi, killing one and injuring four others. The earthquake was centered approximately 35 kilometers (20 miles) south of Palu, 10 kilometers (6.2 miles) beneath the surface. Located in the center of the arc of islands that form Indonesia, Sulawesi is at the heart of one of the most geologically active regions in the world. The effect of millennia of shifting ground on the island is readily apparent in this elevation image, created using data from the Shuttle Radar Topography Mission (SRTM). SRTM was designed to collect three-dimensional measurements of the Earth's surface using a radar instrument that flew aboard the Space Shuttle Endeavour in February 2000.

In the above image, the highest elevations are white and pink, while low elevations are green. Two mountain ranges run north-south from the center of the island to the shore. Between the two ranges, a finger of green marks out a straight valley that was formed by the fault. As this image reveals, the January 24 earthquake was centered just a few kilometers west of this fault.

Like the San Andreas fault, Sulawesi’s fault is a transform fault formed when two tectonic plates slide past each another. Indonesia sits on top of three major tectonic plates—giant slabs of the Earth’s crust that float on the planet’s molten core. The majority of the islands in the nation sit on the Eurasian plate, caught between the north-moving Australian plate and the west-moving Pacific plate. Around Sulawesi, three smaller plates clash, adding to the seismic activity. All of this jostling between plates leads to frequent earthquakes and active volcanoes; Indonesia has more historically active volcanoes (76) than any other region on Earth.