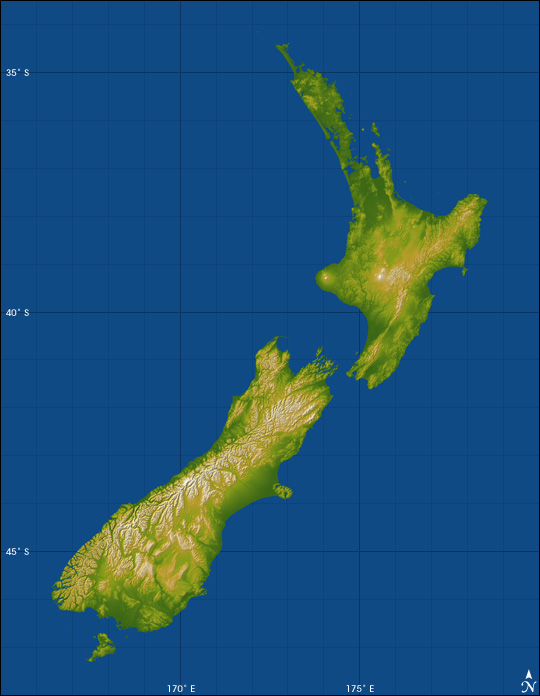 The collision of the two plates has built two major islands that together exhibit active volcanoes and fault systems, and these geologic features are very evident in the topographic pattern. The image above shows a topographic map of the North and South Islands of New Zealand made from radar data collected by the Space Shuttle Endeavor. Elevation is color-coded, with green at the lower elevations, rising through yellow and tan, to white at the highest elevations. Shading reveals the direction of slopes. Northwest slopes appear bright, and southeast slopes appear dark.

The North Island lies at the southern end of the west-over-east (Australian over Pacific) plate convergence. Here, the Pacific plate dives under the North Island, and the immense heat and pressure created by this subduction process melts the deep rock. The melted rock (magma) rises to the surface through the North Island’s volcanoes and other geothermal features. Most notable are Mount Egmont on the west coast, and Mounts Ruapehu, Ngauruhoe, and Tongariro, clustered just south of the island’s center. The Rotorua geothermal field is northeast of that cluster of volcanoes, and the field appears as a scattering of bumps created by smaller volcanic eruptions.

Instead, South Island features a fault system that connects the northern subduction zone to the southern one, which occurs south of South Island. The Alpine fault is the major strand of this fault system along most of the length of the island, near and generally paralleling the west coast. Its impact upon the topography is unmistakable, forming an extremely sharp and straight northwest boundary to New Zealand’s tallest mountains, the Southern Alps. Along the Alpine Fault, the plates are sliding past each other (moving horizontally) somewhere between 35-40 millimeters per year. Vertical differences between the two plates increase at a rate of about 7 millimeters per year, which is consistent with the ongoing uplift of the Southern Alps.

Elevation data used in this image were acquired by the Shuttle Radar Topography Mission aboard the Space Shuttle Endeavour, launched on Feb. 11, 2000. SRTM used the same radar instrument that comprised the Spaceborne Imaging Radar-C/X-Band Synthetic Aperture Radar (SIR-C/X-SAR) that flew twice on the Space Shuttle Endeavour in 1994. SRTM was designed to collect 3-D measurements of the Earth’s surface. To collect the 3-D data, engineers added a 60-meter (approximately 200-foot) mast, installed additional C-band and X-band antennas, and improved tracking and navigation devices. The mission is a cooperative project between NASA, the National Geospatial-Intelligence Agency (NGA) of the U.S. Department of Defense and the German and Italian space agencies. It is managed by NASA’s Jet Propulsion Laboratory, Pasadena, Calif., for NASA’s Earth Science Enterprise, Washington, D.C.