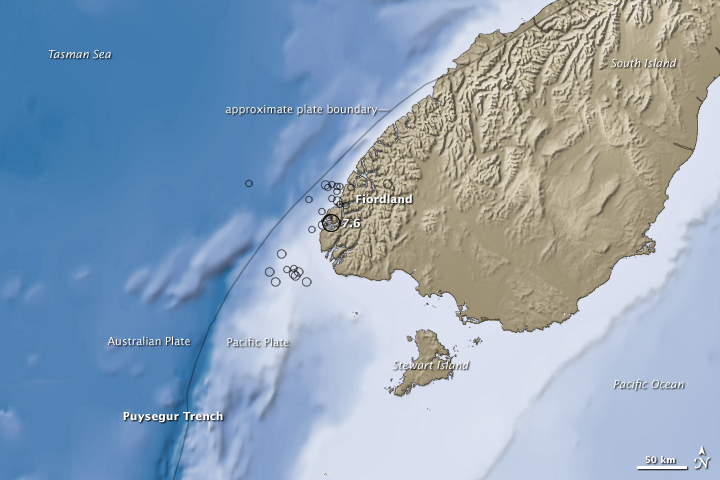 A 7.6-magnitude earthquake along the southwest coast of the South Island of New Zealand on July 15, 2009, was a dramatic reminder that the area is part of the Pacific Ring of Fire. Less nerve-rattling evidence of the area’s tectonic activity is revealed in this image of the bathymetry (shades of blue) and topography (shades of brown) of the southwestern part of the South Island, known as Fiordland, and the surrounding waters of the Tasman Sea and Pacific Ocean.

Earth’s solid crust is broken into more than a dozen slabs, or plates, that drift slowly around the planet. Around New Zealand, the Australia Plate collides with the Pacific Plate; the approximate boundary is traced with a black line on this image. The pressure of the collision is released in complicated ways, creating fracture zones, deep trenches, and high mountains. Near and south of Fiordland, the Australia Plate is being forced below (subducted) the Pacific Plate at the Puysegur Trench, which is more than 5,000 meters (16,404 feet) deep. North of Fiordland, the two plates collide and grind past each other; the pressure of the colliding plates is raising the Southern Alps.

Earthquakes occur because tectonic plates don’t simply slide smoothly past or over each other. They are pressed together with tremendous force, and they can be become temporarily stuck together, while the pressure builds. For a time, the crust can bend or stretch under the strain like a tree branch bends under the weight of heavy snow, but eventually the rocks break and the energy is released. According to the U.S. Geological Survey, the July 15 quake and its aftershocks (locations and magnitudes indicated by circles) occurred in the subduction part of the Australia-Pacific plate boundary. Phone lines and some buildings were damaged, and a small tsunami occurred, but no fatalities were reported, according to news reports.