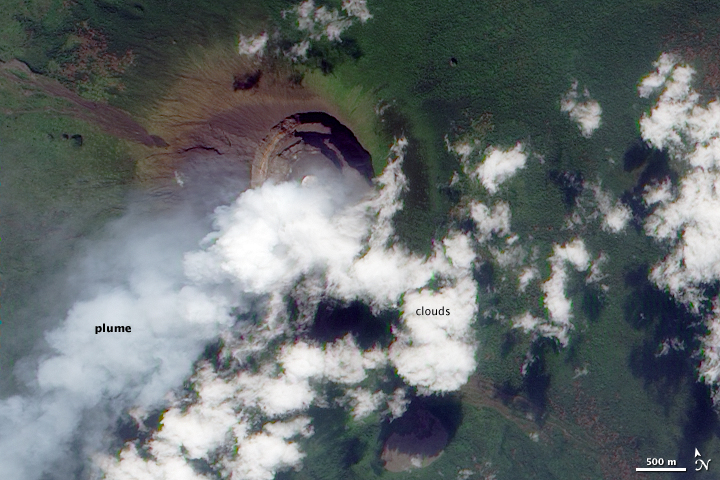 Nyiragongo Volcano in the Democratic Republic of the Congo released a small plume on June 27, 2009, as the Advanced Land Imager (ALI) on NASA’s Earth Observing-1 (EO-1) satellite passed overhead. In contrast with the bright white clouds in this natural-color image, the plume appears pale blue-gray. The volcanic plume blows away from the summit toward the west-southwest. Although clouds partly obscure the summit, some of its bare-rock surface appears in the upper left quadrant. The eastern slopes of Nyiragongo are green with vegetation.

Reports of low-level activity at Nyiragongo began in March 2009 and persisted through May, according to the Volcanism Blog. On May 5, 2009, the United Nations Institute for Training and Research Operational Satellite Applications Programme (UNOSAT) released a report of volcanic hotspots at Nyiragongo detected by NASA’s Moderate Resolution Imaging Spectroradiometer (MODIS) sensors. MODIS detected hotspots on six different occasions between April 10 and May 4, 2009. The plume observed by ALI in late June may be a continuation of that low-level activity.

Nyiragongo is a stratovolcano—a steep-sloped structure made of alternating layers of solidified ash, hardened lava, and rocks released by previous eruptions. In contrast to the low profile of neighboring Nyamuragira, Nyiragongo rises to a height of 3,470 meters (11,384 feet) above sea level. Lava flows from Nyiragongo caused substantial casualties in 1977 and 2002.

This true-color image shows a blue-gray plume blowing away from the bare-rock summit of Nyiragongo Volcano and toward the west-southwest on June 27, 2009.

Nyiragongo Volcano in the Democratic Republic of the Congo is one of Africa’s most active. 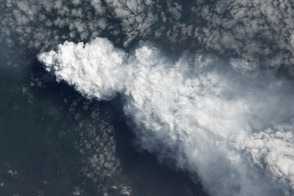 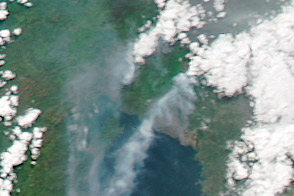 Acquired July 28, 2009, this true-color image provides a relatively clear view of the summit of Nyiragongo Volcano as it releases a faint plume.

A blue-tinged pall completely obscures Nyiragongo Volcano in the Congo.

One of Africa’s most active volcanoes vents a thick steam plume.