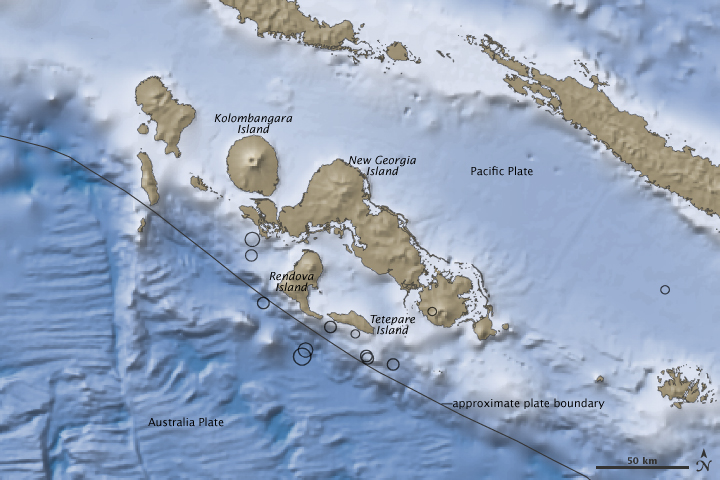 A strong earthquake near the Solomon Islands, northeast of Australia, caused landslides and a small tsunami on January 4, 2010. Hundreds of homes and other buildings on islands close to the epicenter are reported to have been damaged, but according to BBC news reports, no deaths or serious injuries had been reported as of early Monday afternoon.

This image shows the topography (shades of brown) and bathymetry (shades of blue) in the area where the 7.2-magnitude quake occurred. Lighter colors indicate higher elevation on land and shallower depth in the water. The location of the largest quake and smaller pre- and post-quake tremors are indicated by black circles. The Solomon Islands sit at the edge of the Pacific Plate along its boundary with the Australia Plate to the southwest. The lighter blues of the Pacific Plate show that seas are shallower there than they are over the Australia Plate. The islands closest to the epicenter of the quake were Rendova and Tetepara.

The Australia plate is sliding under the Pacific Plate at about 9.5 centimeters (3.7 inches) per year in this location. As the two plates converge, they become stuck together in places. Eventually, the pressure exceeds the strength of the rocks, and brittle parts of the crust break—an earthquake. According to the U.S. Geological Survey’s preliminary report, the January 4 quake was consistent with an underthrust earthquake, in which rock from the Australia Plate was abruptly shoved under the Pacific Plate.

This map shows the region surrounding the earthquakes that occurred near Vanuatu on October 7 and 8, 2009. Ocean water appears in shades of blue, and land areas appear in shades of brown. Circles mark earthquake locations, and a black line marks the tectonic plate boundary.