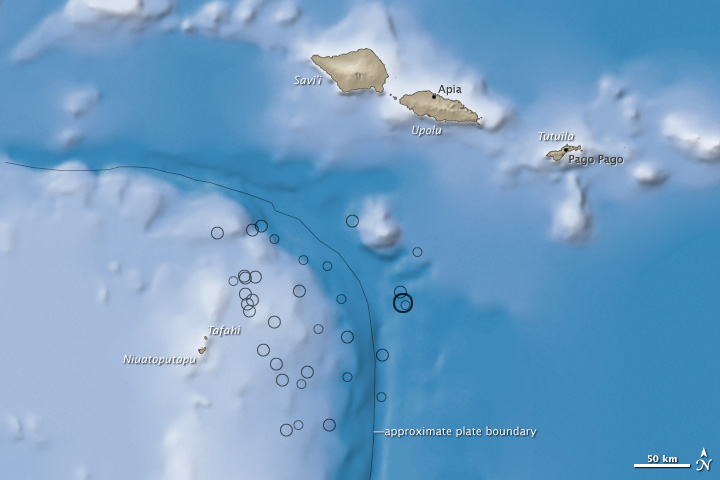 On the morning of September 29, 2009, a large undersea earthquake near Samoa generated a destructive tsunami that killed more than 100 people, said news reports. According to measurements from the United States Geological Survey (USGS), the magnitude 8.0 quake hit at 6:48 a.m. about 200 kilometers (125 miles) south of Apia, the capital of Samoa. The tsunami struck the islands of Savi’i, Upola, and Tutuila minutes later with waves that were 3.1 meters (10 feet) high near Pago Pago (American Samoa) and 1.4 meters (4.6 feet) in Apia, said the USGS. Smaller tsunamis hit other Pacific islands farther away from the quake’s epicenter.

This image shows the location of the earthquake in relation to the islands. The earthquake epicenter, shown by a large black circle, was located on the Pacific tectonic plate near its boundary with the Australian Plate (southwest corner of map). Dozens of magnitude 4 and 5 aftershocks, shown by open circles, followed the initial earthquake, continuing until at least September 30th.

The knee-shaped area of deep water is the Tonga Trench, a deep canyon on the edge of the Pacific Plate. The trench and associated faults are forming as the Pacific Plate moves westward, sinking beneath a complex series of smaller plates on the edge of the Australian Plate, the shallower area in the lower left corner of the image. The region around the Tonga Trench is one of the most active earthquake regions in the world, said the USGS.