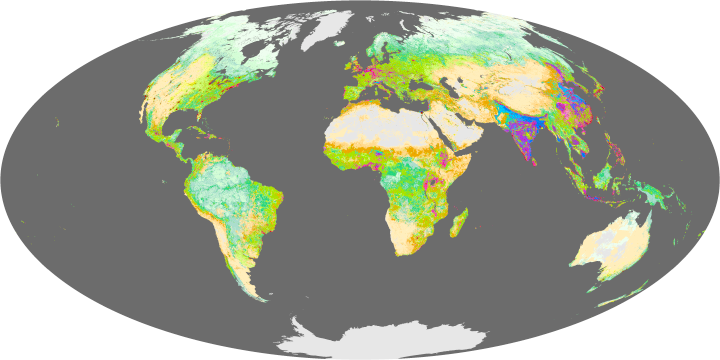 Rainforest, grassland, desert, tundra. Students learn about biomes—plant communities collectively shaped by climate and terrain—early on, and scientists find biomes useful in predicting changes in Earth’s biosphere. But how accurate are categories that don’t account for human involvement? As a 2007 Science study states, “There really is no such thing as nature untainted by people,” and even “pristine” rainforests in the Amazon and Congo show evidence of prehistoric settlements. In a 2008 paper in Frontiers in Ecology and the Environment scientists argued that more than three-quarters of Earth’s ice-free land shows evidence of human alteration. Based on widespread human alteration of Earth’s land surface, the authors of the 2008 study propose a new classification system: anthropogenic biomes or anthromes—ecological patterns caused by human impact.

This color-coded map shows the anthropogenic biomes across Earth’s terrestrial biosphere, based on the 2008 study. Settlements include the most densely populated urban areas on our planet, as well as agricultural settlements supporting more than 100 people per square kilometer. Croplands include agriculture and a variety of other land uses. Rangelands include areas used for grazing with some minimal crops and forests. Forested areas include forest with people and agriculture. Wildlands incorporate those areas left on Earth without people or agriculture. In general, human population density follows a gradient from the highest population densities in settlements to virtually zero population density in wildlands.

The most common anthropogenic biome in this image is rangeland, areas where livestock graze and human population is low. Rangelands, shown in shades of orange, tend to be in areas where crops don’t grow well—marginal lands—such as the dry desert highlands of the western United States and Central Asia. The second most common human biome is cropland, shown in shades of green and yellow.

Urban areas and dense settlements appear as red dots scattered across the image, concentrated largely in coastal regions. Though more than 80 percent of the world’s population lives in densely populated urban areas or village biomes, cities or towns surrounded by cropland, these areas cover just seven percent of the planet’s ice-free land surface. Shown in blue and pink tones, the village biomes are clearly the most common form of settlement in the world. One in four people live in such agricultural settlements, say the map’s authors.

The remaining land surface in the image is either forested or wildlands. Patches of populated forest appear in the eastern Amazon and through much of Sub-Saharan Africa. Light and mint greens indicate remote and wild forests, and these predominate in the boreal forests of Canada and Russia. Smaller areas of remote forest occur in the Amazon and the Congo. Earth’s two extremes—barren deserts and frozen, ice-covered land—are both shown in gray. The Sahara Desert alone comprises one-third of the barren desert portion of the biome. Wildlands comprise both the least productive and least populous land areas on our planet. This is not surprising given people’s tendency to seek out, develop, and settle the most productive land.