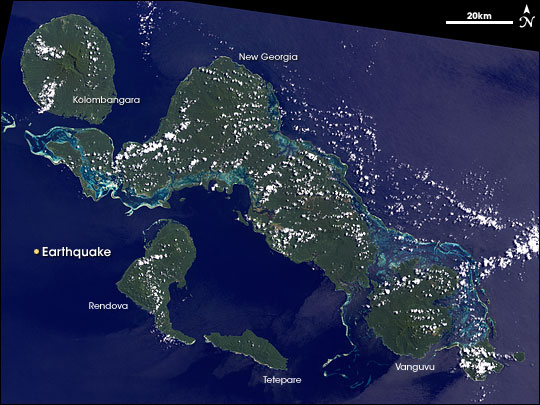 On April 1, 2007, a magnitude 8.1 earthquake rattled the Solomon Islands, 2,145 kilometers (1,330 miles) northeast of Brisbane, Australia. Centered less than ten kilometers beneath the Earth’s surface, the earthquake displaced enough water in the ocean above to trigger a small tsunami. Though officials were still assessing damage to remote island communities on April 3, Reuters reported that the earthquake and the tsunami killed an estimated 22 people and left as many as 5,409 homeless. The most serious damage occurred on the island of Gizo, northwest of the earthquake epicenter, where the tsunami damaged the hospital, schools, and hundreds of houses, said Reuters.

This image, captured by the Landsat-7 satellite, shows the location of the earthquake epicenter in relation to the nearest islands in the Solomon Island group. Gizo is beyond the left edge of the image, but its triangular fringing coral reefs are shown in the upper left corner. Though dense rain forest hides volcanic features from view, the very shape of the islands testifies to the geologic activity of the region. The circular Kolombangara Island is the tip of a dormant volcano, and other circular volcanic peaks are visible in the image. The image also shows that the Solomon Islands run on a northwest-southeast axis parallel to the edge of the Pacific plate, the section of the Earth’s crust that carries the Pacific Ocean and its islands.

The earthquake occurred along the plate boundary, where the Australia/Woodlark/Solomon Sea plates slide beneath the denser Pacific plate. Friction between the sinking (subducting) plates and the overriding Pacific plate led to the large earthquake on April 1, said the United States Geological Survey (USGS) summary of the earthquake. Large earthquakes are common in the region, though the section of the plate that produced the April 1 earthquake had not caused any quakes of magnitude 7 or larger since the early 20th century, said the USGS.

NASA image by Robert Simmon, based on Landsat data from the University of Maryland’s Global Land Cover Facility.