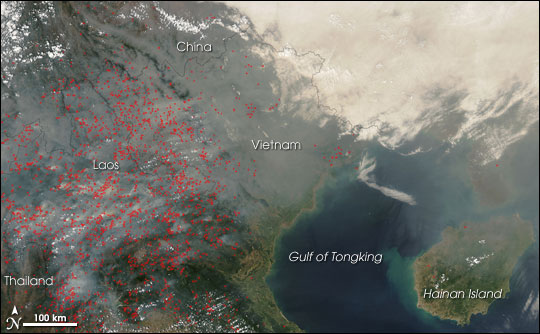 Vehicles and power plants are not the only sources of air pollution and greenhouses gases: fires contribute, too. In the Northern Hemisphere spring, which is the end of dry season across much of Southeast Asia, thousands of fires burn each year as people clear cropland and pasture in anticipation of the upcoming wet (growing) season. Intentional fires also escape people’s control and burn into adjacent forest. The smoke from these fires crosses the Pacific Ocean, affecting climate far away.

This dramatic photo-like image of fires and smoke in Southeast Asia was captured on April 2, 2007, by the Moderate Resolution Imaging Spectroradiometer (MODIS) on NASA’s Aqua satellite. MODIS detected hundreds, possibly thousands of fires (marked in red), burning in Thailand, Laos, Vietnam, and China. Thick smoke hides nearly all of Laos, where the highest concentration of fires is located. In southern China and northern Vietnam, the smoke has sunk into the valleys that crisscross the mountainous terrain; only the highest ridgelines, which appear dark green, emerge from the blanket of smoke. The smoke sails above a bank of clouds at upper right as a dingy, yellowish haze. Fires have been burning in the region for more than month, as shown by the high carbon monoxide levels observed by NASA’s MOPITT sensor during March 2007.

In addition to carbon dioxide and other greenhouse gases, fires produce tiny particles of incompletely burned, or charred, carbon. According to research published in mid-March 2007 in the Journal of Geophysical Research, significant amounts of this black carbon travel across the Pacific Ocean to North America at altitudes above 2 kilometers. In spring 2004, between 25-35 gigatons (roughly 55 to 77 million pounds) of black carbon crossed the Pacific and entered skies over western North America between March 26 and April 25; nearly 75 percent of it came from Asia. (Smoke and other pollution have no respect for borders; for example, scientists have also documented smoke pollution from fires in Alaska and Canada crossing the Atlantic and entering skies over Europe.)

Black carbon influences the climate. Like any dark-colored material, it absorbs incoming sunlight, dimming and cooling the Earth’s surface. But while the surface cools, the atmosphere where the black carbon is located heats up. Which effect is stronger? When scientists looked at the overall effect for an entire column of the atmosphere, black carbon’s warming effects outweighed its cooling effects. They concluded that trans-Pacific transport of black carbon, such as the soot released from the fires shown in this image, may amplify greenhouse-gas warming over the western United States and the Pacific Ocean. The analysis was based on a variety of information, including weather models, observations collected from airplanes, and aerosol data from MODIS.