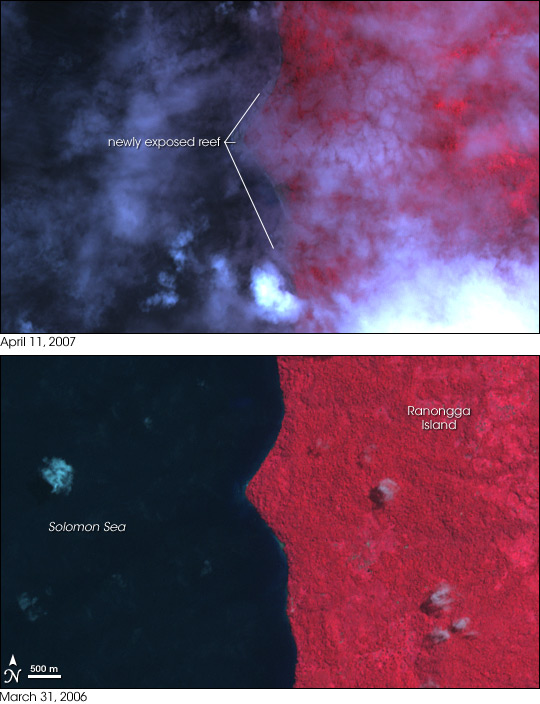 The massive magnitude 8.1 earthquake that jolted the Solomon Islands on April 1, 2007, permanently changed the shoreline on Ranongga Island, west of the epicenter. New beach was added to the western shore of the island when the earthquake lifted the island as much as three meters, exposing near-shore coral reefs, reported the Australian Broadcasting Corporation. The freshly exposed reefs are visible beneath a veil of clouds in the top image, acquired by the Advanced Spaceborne Thermal Emission and Reflection Radiometer (ASTER) on NASA’s Terra satellite on April 11, 2007. The lower image, taken on March 31, 2006, shows the island’s former shoreline. Lush tropical vegetation is red in these images, while the exposed reef is dark grey. Water is black and clouds range from light blue lavender to white. The exposed reef adds tens of meters to most of the shoreline, and more than 150 meters at the tip of the spit of land shown in this image.

The earthquake occurred along the plate boundary, where the Australia/Woodlark/Solomon Sea plates slide beneath the denser Pacific plate. Friction between the sinking (subducting) plates and the overriding Pacific plate led to the large earthquake on April 1, said the United States Geological Survey (USGS) summary of the earthquake. Large earthquakes are common in the region, though the section of the plate that produced the April 1 earthquake had not caused any quakes of magnitude 7 or larger since the early 20th century, said the USGS.

An earthquake in the Solomon Islands lifted Ranongga Island as much as three meters, exposing reefs around the island.