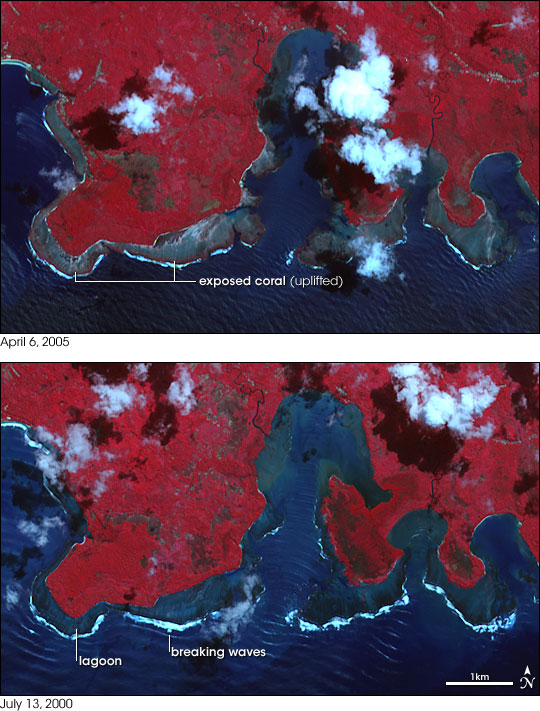 The pair of massive earthquakes near Sumatra, Indonesia, in late 2004 and early 2005, have reshaped the regional landscape. Uplift has raised coastlines out of the water in some areas, while subsidence (sinking) caused the sea to move farther inland in others. The first of the quakes struck on December 26, 2004, and generated a massive tsunami. Stresses from the magnitude 9.0 earthquake—the 4th largest since accurate seismic measurements began in 1900—triggered a second earthquake 200 kilometers (120 miles) to the south just three months later.

These images show uplift on the southern coast of Nias—an island 125 kilometers (80 miles) west of Sumatra. The epicenter of the magnitude 8.7 earthquake (seventh largest since 1900) of March 28, 2005, was approximately 150 kilometers (90 miles) to the northwest of these images (see map). Offshore coral reefs lie exposed in the image from April 6, 2005, compared to the suberged reefs (outlined by breaking waves) observed on July 13, 2000.

Both false-color images (composed of near-infrared, red, and green wavelengths of light) were acquired by the Advanced Spaceborne Thermal Emission and Reflection Radiometer (ASTER) aboard NASA’s Terra satellite. Red indicates vegetation, dark blue is ocean, aquamarine is shallow water or mud, bright cyan and white are clouds, and blue-gray is bare ground. The oceanside edges of the exposed coral may be covered in sea grasses, which would account for their red shading.

Field reports from United States Geological Survey scientists studying earthquake and tsunami effects document uplift of up to 2.5 meters (8 feet) and exposed coral reefs near these images on northern Nias. Both the earthquake and uplift were caused by the subduction of the Australia plate underneath the Sunda plate along a boundary called the Sunda Trench (see map).

Forces from deep within the Earth continuously drag the subducting plate (Australia) underneath the overriding plate (Sunda). Most of the time the plates remain relatively stationary, bound by friction between the rocks grinding together on either side of the boundary. Over hundreds of years, the stresses grow, gradually compressing the rock and dragging the lip of the overriding plate down towards the Earth’s interior with the subducting plate. The stresses eventually overcome the strength of the rocks at the plate boundary. The sudden release of energy sends waves through the Earth, felt as an earthquake on the surface. The leading edge of the overriding plate snaps upwards, raising the terrain above.

NASA image by Robert Simmon, based on data provided by the NASA/GSFC/METI/ERSDAC/JAROS, and U.S./Japan ASTER Science Team