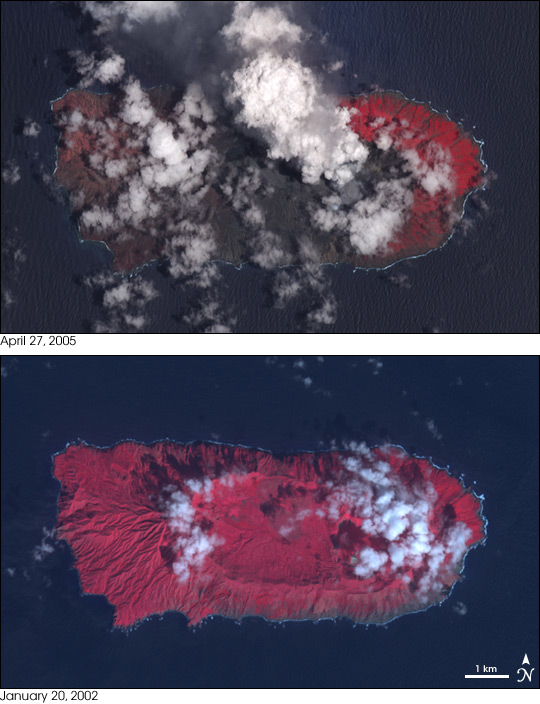 Three years have brought drastic changes to the island of Anatahan in the Northern Mariana Islands. In 2002, when the Advanced Spaceborne Thermal Emission and Reflection Radiometer (ASTER) captured the lower image, the island was made up of two volcanoes whose conjoined summit calderas formed an elliptical valley at the island’s center. Aside from occasional tremors, the island was quiet and no eruption had ever been recorded. Green plants, shown in red in these false-color (infrared-enhanced) images, covered the island and filled the caldera at its center.

By April 27, 2005, the island had been transformed by a series of eruptions. On May 10, 2003, Anatahan’s eastern crater exploded, sending about 10 million cubic meters of material over the island and the surrounding ocean. The eruption continued through June 14, 2003. Smaller eruptions racked the eastern volcano between April and July 2004. The third recorded eruption at Anatahan began on January 6, 2005, and continued intermittently until the volcano exploded with its largest observed eruption on April 6, 2005. In this eruption, about 50 million cubic meters of ash was blasted from the eastern volcano. The volcano was still emitting steam and ash on April 27, when ASTER acquired the top image.

The three eruptions have taken a toll on Anatahan. On April 27, the center of the island was completely devoid of plants, covered instead by grey volcanic material. Ash appears to have blanketed the western fringe of the island, where a layer of grey covers the underlying vegetation. The light cloud, ash and steam that cover the island make it difficult to see changes to the caldera, but it appears that the eruptions may have destroyed its southern wall. It also appears that volcanic material may have flowed into the Pacific Ocean on the south side of the island. The changes are easier to see at ASTER’s full resolution of 15 meters per pixel, provided above. The full scene, top link, shows the island and the plume of ash that extends northwest of the volcano. The center link provides a large version of the scene cropped in on the island to match the 2002 image.

Anatahan Island sits in the center of the Northern Mariana Islands. The island arc forms a classic arc that frames the eastern edge of the Philippine plate, a large section of the Earth’s crust that floats on a layer of softer rock. To the east of the Marianas, the slab of crust that carries the Pacific Ocean crashes against the Philippine Plate. In the clash, the colder, denser Pacific Plate sinks beneath the Philippine Plate, forming the Mariana Trench, a deep gorge that plunges to a depth of 10,920 meters (35,827 feet) — deeper than Everest is tall and the deepest known point in any ocean. Plummeting deep into the Earth, the Pacific Plate breaks up, and the pressure and the heat melts some of the breaking rock. The hot rock forces its way back to the surface through weak points in the overriding Philippine Plate, creating the arc of volcanoes that make up the Northern Mariana Islands. Among the 14 small islands in the Northern Mariana Islands, there are 12 major volcanoes, including Anatahan.