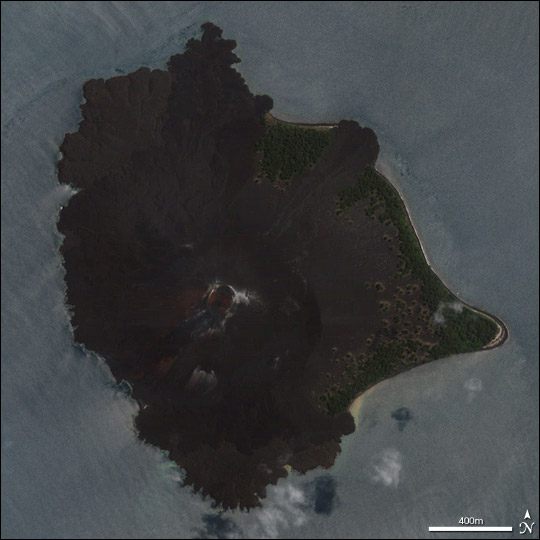 On an atlas of the world, Anak Krakatau Island appears as a tiny dot in the narrow channel that separates the Indonesian islands of Sumatra to the northwest and Java to the southeast. In the time scales used by geologists to benchmark the history of the Earth, Anak Krakatua is a newborn, the newest arrival in a cycle of volcanic creation and destruction in this space between the big islands.

The two most striking features in this Ikonos satellite image from March 3, 2003, of Anak Krakatau are the large volcano in the island’s center and the small galleries of forest creeping around the eastern coast. In 1927, Javanese fishermen saw steam and debris being spewed out of the ocean where Anak Krakatau would eventually form, and over the next several years, lava from repeated eruptions on the ocean floor began mounding up. By August of 1930, a small island had broken the surface of the Sunda Strait. The island was called Anak Krakatau, or “Child of Krakatau.”

The name is a testament to the history of explosive eruption, caldera collapse, and island fragmentation around Krakatau. In 1883, Krakatau consisted of three islands that were themselves the remnants of an even older volcanic eruption and collapse: Venlaten to the northwest, Lang to the east, and Krakatau Island, which was a coalescence of three volcanoes running in a north-to-south line.

In August of 1883, a huge volcanic eruption—one of the largest in recorded history— rocked Krakatau. The sound of the explosion was so loud that people heard it thousands of kilometers away in Madagascar and Australia. As the eruption emptied the island’s magma chamber, the northern two-thirds of Krakatau Island collapsed beneath the sea surface into the emptying caldera. The tsunamis produced as the island collapsed into the sea were as high as 40 meters (132 feet); the monster waves radiated out from the eruption site across the Indonesia islands, killing tens of thousands of people, and stripping some islands of all vegetation and animal life.

Only a small remnant of the southernmost volcano on the island, known as Rakata, remained. Today, it is this remnant that is called Krakatau. Eruptions have continued to occur nearly every year since the dangerous Krakatau was reborn as Anak Krakatau in 1927. The numerous lava flows give the island a scorched, lifeless look. Scalloped edges where lava flows have met the ocean give the northern coastline a cauliflower appearance.