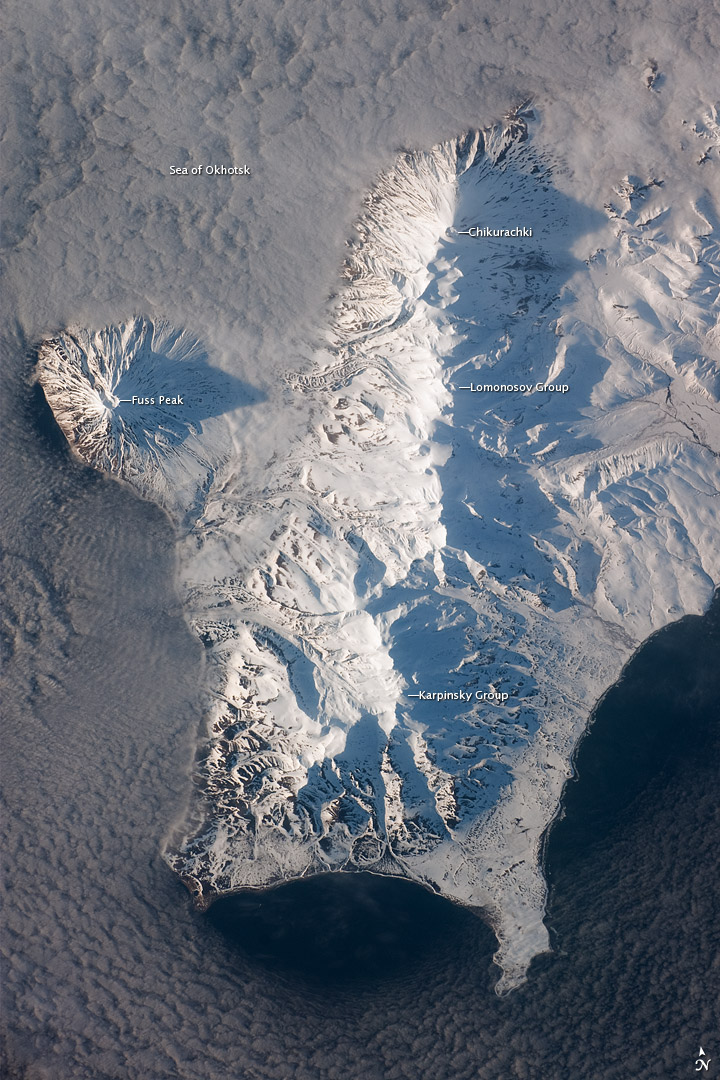 The Kuril Island chain is built from a line of volcanoes, an island arc, that extends from Russia’s Kamchatka Peninsula to northern Japan. Island arcs form along an active boundary between two tectonic plates, with one being driven beneath the other (subduction). Magma generated by subduction feeds volcanoes—and eventually volcanic islands—over the subduction boundary.

Paramushir Island in the northern Kurils is an example of a large island built by several volcanoes over geologic time. This astronaut photograph shows the southern end of Paramushir Island after a snowfall. The western slopes of the mountains are brightly illuminated, while the eastern slopes are in shadow.

Four major volcanic centers create this part of the island. Fuss Peak (image center left) is an isolated stratovolcano connected to the main island via an isthmus. Fuss Peak last erupted in 1854.

The southern tip of the island is occupied by the Karpinsky Group of three volcanic centers. A minor eruption of ash following an earthquake occurred on this part of the island in 1952.

The Lomonosov Group to the northeast (image center) includes four cinder cones and a lava dome that produced several lava flows in the past, but there have been no eruptions from the Lomonosov Group in recorded history.

The most recent volcanic activity on Paramushir Island occurred in 2008 at the Chikurachki cone located along the northern coastline of the island at image top center. The summit of this volcano [1,816 meters (5,958 feet) above sea level] is the highest on Paramushir Island.

Much of the Sea of Okhotsk visible in the image is covered with low clouds that often form around the islands in the Kuril chain. The clouds are generated by moisture-laden air passing over the cool sea/ocean water, and they typically wrap around the volcanic islands.

Astronaut photograph ISS023-E-41934 was acquired on May 12, 2010, with a Nikon D3 digital camera using an effective 280 mm lens, and is provided by the ISS Crew Earth Observations experiment and Image Science & Analysis Laboratory, Johnson Space Center. The image was taken by the Expedition 23 crew. The image in this article has been cropped and enhanced to improve contrast. Lens artifacts have been removed. The International Space Station Program supports the laboratory as part of the ISS National Lab to help astronauts take pictures of Earth that will be of the greatest value to scientists and the public, and to make those images freely available on the Internet. Additional images taken by astronauts and cosmonauts can be viewed at the NASA/JSC Gateway to Astronaut Photography of Earth. Caption by William L. Stefanov, NASA-JSC.