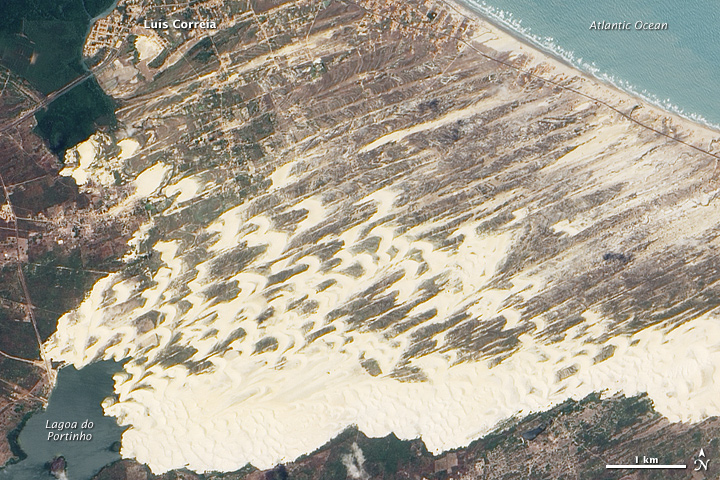 Sand dunes sprawl along the coast of northeastern Brazil, sometimes extending kilometers inland. One substantial area of coastal dunes, shown in an astronaut photograph from 2003, has been protected as a national park, but the park boundaries only enclose a fraction of the marching sand dunes. Some 135 kilometers (85 miles) east of the park, another stretch of dunes pushes inland, near the city of Luís Correia.

The Advanced Land Imager (ALI) on NASA’s Earth Observing-1 (EO-1) satellite captured this natural-color image of the dune field near Luís Correia on September 11, 2002. At their southwesternmost extent, the dunes border an inland water body, Lagoa do Portinho (image lower left). In the northwest, the dunes are interrupted by cityscape. Besides settled and watery areas, the dunes are bordered by thick vegetation (image upper left and lower right). Between the shore and the inland edge of the dune field, sand alternates with vegetated ground.

The northeast-southwest sandy stripes in this image betray the prevailing wind direction, which is generally from the east. Captured during the region’s dry season, the picture shows a mixture of brown and green in the dune-free areas. In the southeast, just beyond the edge of the dune field, the land appears as a patchwork of brown and green. At other times of year, the same area shows a mixture of lush vegetation and standing water.