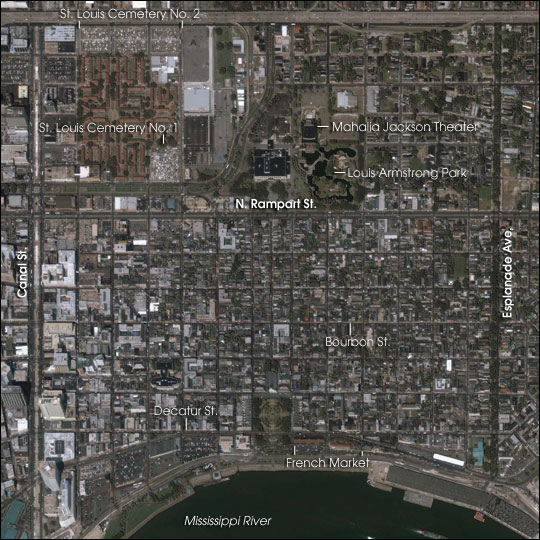 Nestled between the Mississippi River and Lake Pontchartrain, New Orleans is a city known for its distinctive cuisine, multicultural heritage, and revolutionary music. The city was established by French fur traders in 1718 along a Native American trade route. It was ceded to the Spanish in 1763 before being sold to the United States in 1803 as part of the Louisiana Purchase. Today, New Orleans is the largest city in Louisiana. At the heart of the city is the colonial French Quarter, where most of the buildings date from the eighteenth century.

Spanning 14 blocks between Canal Street and Esplanade Avenue, and 7 blocks between the Mississippi River and North Rampart Street, the French Quarter is shown in this Ikonos image, acquired on August 28, 2002. Bourbon Street—a name almost synonymous with American jazz music—runs through the heart of the French Quarter, just below the center of the image. It is in the clubs and bars of the street that jazz music established itself, but the place recognized as the birthplace of jazz is located a few blocks away in Congo Square. Now in the center of Louis Armstrong Park, just above the center of the image, Congo Square was a gathering place for slaves and free blacks in the nineteenth century. African dance and music pervaded this important cultural site, preserving traditions and music that would feed modern jazz.

In 1970, Congo Square hosted New Orleans’ first Jazz and Heritage Festival, which featured jazz greats Duke Ellington and Mahalia Jackson, among others. A crowd of 350 gathered for the first fest, but the event grew quickly. In 2001, as many as 650,000 attended the annual “Jazz Fest,” which moved to the much larger Fair Grounds Race Course (not shown in this image) when the event outgrew Congo Square in 1971. Jazz Fest 2005 is running from April 22 to May 1.

Other New Orleans landmarks are visible in this image. Nearest the river, a block-long red roof marks out the French Market, a mix of community flea market, craft market and open-air farmer’s market. On the other side of Decatur Street, circular landscaping makes Jackson Square easy to identify. At its center—a tiny dot in this image—is a statue of its namesake, Andrew Jackson, the seventh president of the United States and the general who successfully defended the city from British attack during the war of 1812.

Along the right side of the Quarter, Esplanade Avenue is wide and green, clearly tree-lined. In fact, the trees seen in this image are the ancient Spanish oak trees that shield nineteenth-century Creole mansions from the street. In the upper left corner of the image is a different kind of neighborhood altogether—a “city of the dead.” The above-ground mausoleums in St. Louis Cemeteries Number 1 and Number 2 form tiny white dots in this image. In New Orleans, a high water table makes traditional underground burials impossible, so the cemeteries are made of above-ground tombs arranged in streets.