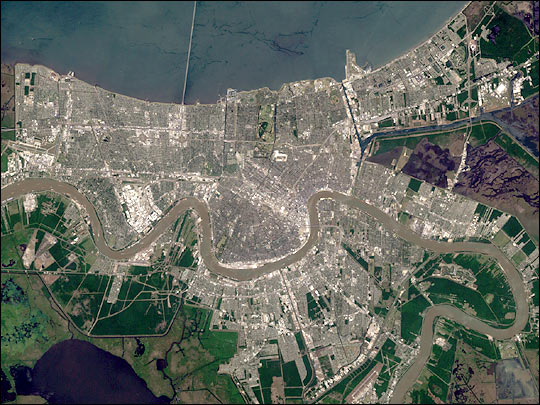 On Sunday, February 3, roughly 800 million eyes from all over the world will be trained on the Louisiana Superdome in New Orleans as the New England Patriots battle the St. Louis Rams for the NFL Championship in Super Bowl XXXVI. This true color image of New Orleans was acquired on April 26, 2000, by the Enhanced Thematic Mapper plus (ETM+), flying aboard the Landsat 7 satellite. Lake Pontchartrain borders the city to the north. The big river winding its way east to west through the image is the Mississippi. The Louisiana Superdome, built in 1975, sits just inside the rightmost portion of the big river bend that cradles downtown New Orleans.

The city, however, may not be around to hold a Super Bowl in 2102. New Orleans is slowly sinking into the Gulf of Mexico. The construction of flood walls and dams north of New Orleans over the past century have prevented sediments carried by the Mississippi River from reaching New Orleans and the Mississippi River Delta. Before the dams were built, river sediments would empty out onto the delta adding layer upon layer of new soil each year. The additional soil prevented the Gulf from subsuming the delta. Unless drastic measures are taken, the city and the delta could be awash in seawater by the end of this century.

Image by Robert Simmon, based on data provided by the Landsat 7 Science Team