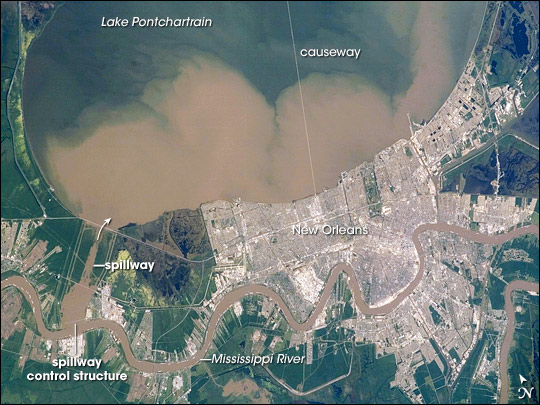 Heavy rain in March and April 2008 in the Mississippi’s catchment area raised water levels in the river enough that the Army Corps of Engineers had to take action to prevent flooding. To reduce the volume of the river through New Orleans, the Corps opened the Bonnet Carre Spillway (lower left), which diverts some of the river’s flow into Lake Pontchartrain. Located about 18 kilometers (about 11 miles) upriver from New Orleans, the Bonnet Carre Spillway is a 1.6-kilometer-wide (1-mile) gap in the developments along the Mississippi River levees. The spillway control structure itself is visible as a thin, discontinuous, white line along the river’s edge in this image.

The spillway has only been opened eight times since 1937. News of the opening in April 2008 was transmitted to astronauts aboard the International Space Station who managed to capture the immediate effect of muddy water flowing down the spillway and into Lake Pontchartrain. The flood plume forms great brown lobes in the otherwise green water. These lobes moved slowly east along the New Orleans shoreline. The line of the Lake Pontchartrain Causeway, the longest bridge in the United States, is visible cutting across the lake.

As the southernmost spillway in the Corps of Engineers flood control infrastructure for the Lower Mississippi Valley, the Bonnet Carre plays a major role in protecting New Orleans from flooding. Opening the spillway protects the city in various ways. First, it lowers water levels and reduces both the speed of flow and cross currents in the river, which can interfere with vessels navigating the river—or even cause collisions with levees. It also reduces pressure on downstream levees, some of which famously collapsed during the onslaught of Hurricane Katrina in 2005.

Astronaut photograph ISS017-E-5763 was acquired on April 29, 2008, with a Kodak 760C digital camera fitted with an 180 mm lens, and is provided by the ISS Crew Earth Observations experiment and Image Science & Analysis Laboratory, Johnson Space Center. The image was taken by the Expedition 17 crew, and is provided by the Image Science & Analysis Laboratory, Johnson Space Center. The image in this article has been cropped and enhanced to improve contrast. Lens artifacts have been removed. The International Space Station Program supports the laboratory to help astronauts take pictures of Earth that will be of the greatest value to scientists and the public, and to make those images freely available on the Internet. Additional images taken by astronauts and cosmonauts can be viewed at the NASA/JSC Gateway to Astronaut Photography of Earth. Caption by M. Justin Wilkinson, NASA-JSC.

Taken May 17, 2011, this astronaut photograph shows a plume of thick sediment in Lake Pontchartrain, delivered through the Bonnet Carré Spillway.