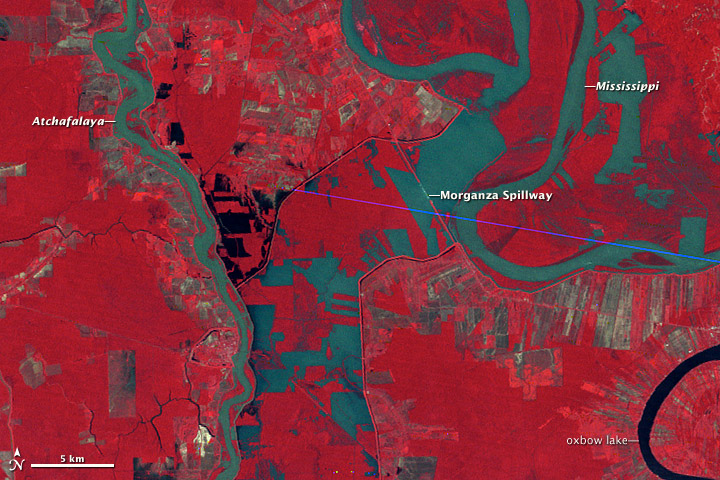 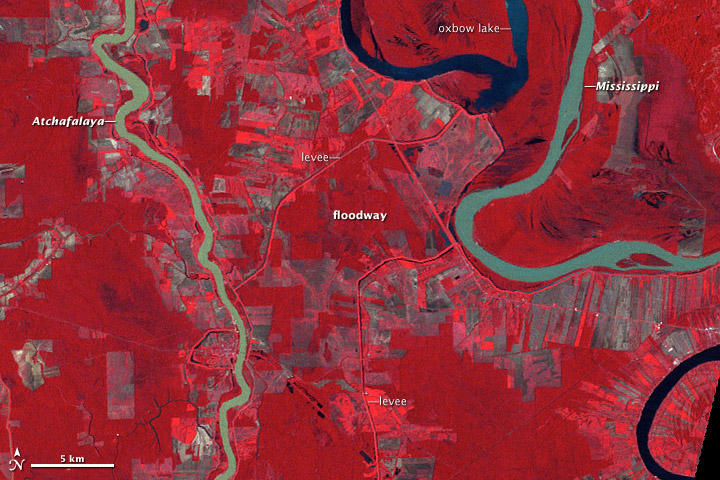 As flood waters continued to surge through the Mississippi River watershed in May 2011, the U.S. Army Corps of Engineers weighed whether to open spill gates onto the Morganza Floodway. The floodway, designed to reduce water levels in the Mississippi during emergencies, was last open from April 19 to June 13, 1973, the only time it has ever been opened.

The top image shows water flowing through the floodway on May 5, 1973, as observed by Landsat 1. The bottom image from Landsat 2 shows the same area in 1977 without flooding. The images include near-infrared, red, and green wavelengths of light. Vegetation appears red, muddy water is greenish brown, clear water is blue-black, and bare soil is gray to tan. In the 1973 image, red areas within the floodway may include vegetation (red) tall enough to stand above the flood water.

The floodway lies on the west side of the Mississippi, about 35 miles (56 kilometers) north of Baton Rouge, Louisiana. It averages five miles (8 kilometers) in width and stretches 20 miles (32 kilometers) to the southwest. Completed in 1954, the flood control structure, or spillway, was built to relieve stress on levees further downstream by diverting excess water from the river into the Atchafalaya River Basin.

According to the Army Corps of Engineers, the spillway was designed to maintain a Mississippi River flow rate of no greater than 1.5 million cubic feet per second at Red River Landing. The spillway is roughly 4,000 feet (1,219 meters) long, includes 125 gated openings, and has the capacity to move roughly 600,000 cubic feet of flood water per second.

The Army Corps notes on its web site: “The decision to open the Morganza Floodway relies on current and projected river flows and levee conditions, river currents and potential effects on navigation and revetments, extended rain and stage forecasts, and the duration of high river stages. When river flows at the Red River Landing are predicted to reach 1.5 million cubic feet per second and rising, the Corps considers opening the Morganza Floodway.” At 7 a.m. Central Daylight Time on May 13, 2011, the Army Corps estimated flow rates were 1.449 million cubic feet per second.

The Mississippi River has the third largest drainage basin in the world., behind only the Congo and the Amazon. It drains 41 percent of the 48 contiguous United States, including all or part of 31 states and two Canadian provinces. Extreme floods along the Mississippi in 1927 floods led the U.S. Congress to pass to the Flood Control Act of 1928, authorizing construction of levees, floodways, and other landscape modifications to control the flow of the Mississippi River.