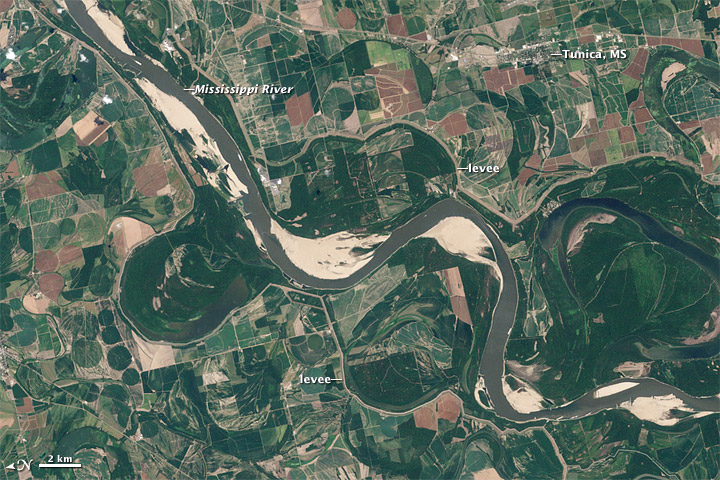 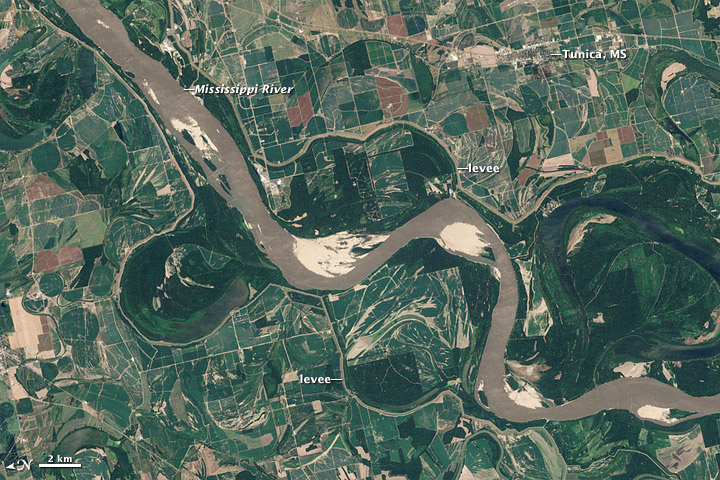 In the spring of 2011, the Mississippi River swelled to historic levels, rising out of its banks, rolling across a wide flood plain, and eating at flood barriers. The story in 2012 could not be more different; the river has approached record-low levels in places.

The contrast is illustrated in these two images, which show a stretch of the river just south of Memphis, Tennessee. Landsat 7 captured the top image on August 8, 2012, while Landsat 5 took the lower image on August 14, 2011. (The images are rotated so that north is to the left.) In the August 2011 image, the river was three months removed from the peak of the floods, and river gauges recorded levels close to normal for the month. In August 2012, water was several feet below the historic normal stage for Memphis, and many sandbars were newly exposed or greatly expanded.

The Mississippi River is a major North American transit route, carrying goods to and from ports in New Orleans and Baton Rogue. The top image shows that low water levels have narrowed the river from a superhighway to a small road. The U.S. Army Corp of Engineers maintains a 9-foot shipping channel in the lower Mississippi and has dredges working around the clock to keep the channel clear. Not only are water levels low in 2012, but the floods of 2011 dropped a layer of sediment on the riverbed, reshaping previously open channels.

The reduced river flow in 2012 has translated into millions of dollars in extra shipping costs, as the loss of just one inch of draft means that a barge can carry 17 tons less than it otherwise would. The result is decreased shipping capacity.

Reduced water levels had one positive impact: The U.S. Army Corp of Engineers has been able to access and repair levees that were damaged in last year’s floods. The levees are the tan lines that surround the river in these images.

The low water levels followed record-setting temperatures and dry weather. By the end of July, 63 percent of the contiguous United States was in drought, affecting both crops and water supplies. 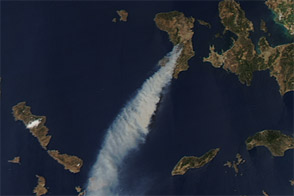