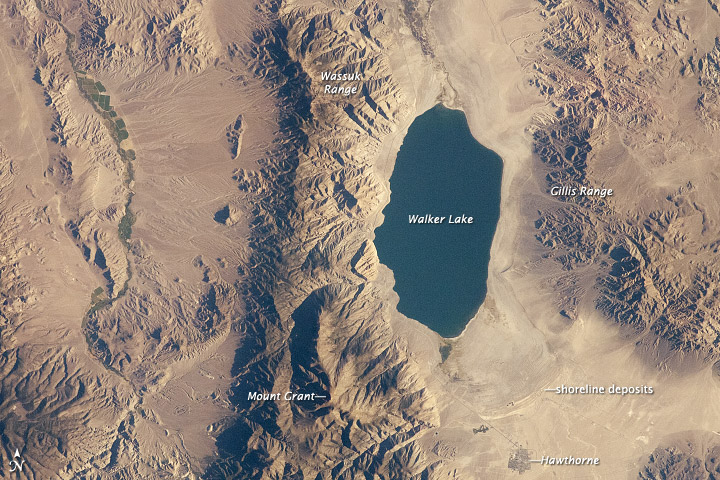 The Pleistocene landscape of western Nevada (about 15,000 years ago) was one of narrow mountain ranges and numerous interconnected lakes that together formed the glacial Lake Lahontan. The drying and warming of the regional climate since the last Ice Age led to the disappearance of the glaciers that provided meltwater and, eventually, to the disappearance of Lake Lahontan itself. Today, few remnants of Lahontan remain; most of its arms have become dry, enclosed basins known as playas.

This astronaut photograph highlights Walker Lake, one of only two remnants of Lake Lahontan that contain water throughout the year. (Pyramid Lake in Nevada is the other.) Walker Lake is located in an enclosed basin, bounded by the Wassuk Range to the west and the Gillis Range to the east. The lake is fed by the Walker River, which flows in from the north. The current dimensions of the lake are approximately 21 kilometers (13 miles) north-to-south by 9 kilometers (6 miles) east-to-west. Shoreline deposits form concentric bands that are just visible in the image; these rings record the varying lake levels when the water was higher in the geologic past.

The nearest town to Walker Lake is Hawthorne, Nevada. To the southwest, the highest peak of the Wassuk Range—Mount Grant (3,496 meters above sea level)—dominates the skyline. Green agricultural fields, primarily alfalfa, to the west of the Wassuk Range provide a striking contrast to the surrounding Great Basin desert. These fields are irrigated using water from the nearby East Fork of the Walker River.

Astronaut photograph ISS032-E-10487 was acquired on July 29, 2012, with a Nikon D2Xs digital camera using a 180 mm lens, and is provided by the ISS Crew Earth Observations experiment and Image Science & Analysis Laboratory, Johnson Space Center. The image was taken by the Expedition 32 crew. It has been cropped and enhanced to improve contrast, and lens artifacts have been removed. The International Space Station Program supports the laboratory as part of the ISS National Lab to help astronauts take pictures of Earth that will be of the greatest value to scientists and the public, and to make those images freely available on the Internet. Additional images taken by astronauts and cosmonauts can be viewed at the NASA/JSC Gateway to Astronaut Photography of Earth. Caption by William L. Stefanov, Jacobs/ESCG at NASA-JSC.

In western Nevada, one of only two remnants of ancient, glacial Lake Lahontan is sandwiched between mountain ridges.

Pyramid Lake, in western Nevada, is a remnant of the ancient and much larger Lake Lahontan that formed during the last Ice Age.