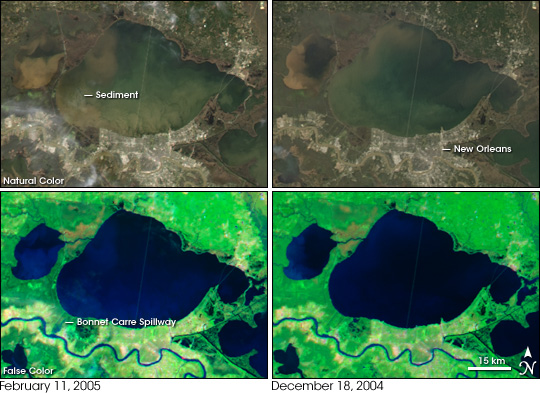 The bulge of floodwater that plagued the Ohio River Valley in January 2005 reached the lower Mississippi River by early February. As late as February 11, water levels were unseasonably high on the Mississippi River in images captured by the Moderate Resolution Imaging Spectroradiometer (MODIS) on NASA’s Aqua satellite. These images show the river around Lake Pontchartrain in Louisiana on February 11, 2005, right, and December 18, 2004, left. The top two images provide a close-up of Louisiana’s Lake Pontchartrain in true color, as the human eye would see it. The lower pair shows the same scene in false color to maximize the contrast between water (black) and vegetation (bright green). Bare ground is pink. Dark smudges of water also cover the wetlands along the western shores of Lake Pontchartrain on February 11.

In its course to the Gulf of Mexico, the lower Mississippi River winds through New Orleans on the south side of Lake Pontchartrain, one of the most densely populated regions in Louisiana. North of the city, the Bonnet Carre Spillway connects the river to Lake Pontchartrain. The spillway was built to divert floods through the lake before the water reaches New Orleans. The floodgate between the spillway and the river is only opened during severe flood events, but water can seep into the spillway through the closed gate. In February 2005, the MODIS image shows a faint trace of water in the spillway, even though the floodgate had not been opened. In December, the spillway appeared dry.

The seeping river water leaks brown clouds of sediment and nutrients into Lake Pontchartrain. When the floodgates have opened in the past, the influx of fresh, nutrient-rich water nourished fish-killing algae blooms. This time, the frigid temperatures of the winter-cold river water are expected to prevent blooms. The sediment itself may also help prevent blooms. The clouded water blocks sunlight the plants need to develop.

In the top, true-color image, muddy swirls of sediment fill Lake Pontchartrain, particularly on the southwest side of the lake near the spillway. Not all of the sediment seen here was pumped into the lake by flood water. The shallow lake is easily stirred by winter winds, and wind may have brought sediment to the surface from the soft lake bottom.

The true color image also shows the world’s longest bridge, the Lake Pontchartrain Causeway. The bridge stretches 38.422 kilometers from north to south across the center of the lake. It is visible in this image as a thin tan line across the dark blue-green waters.