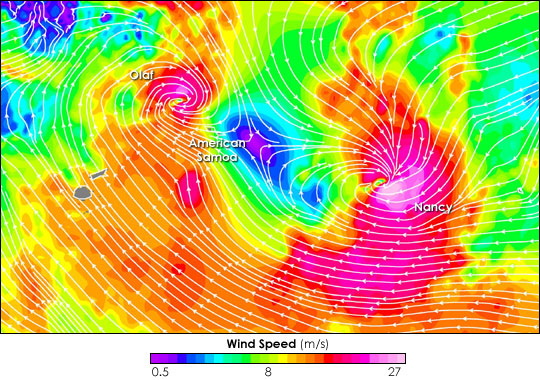 This colorful image superimposes measurements of wind direction on top of wind speed. NASA’s microwave scatterometer, QuickSCAT, collected the image on February 15, 2005, over the South Pacific where two large cyclones are moving steadily closer to one another in a potentially dangerous dance. It is very unusual for cyclones to be so close together in the South Pacific, and it’s hard to predict how the storms will interact. One possibility is that the weaker storm will be tugged off course by the large-scale atmospheric circulation of the other. Eventually the weaker storm will seem to “orbit” the stronger storm. The second possibility is that the outflow from one storm will impede the outflow from the other storm, weakening the second storm. Regardless of the interaction, the storms pose a potentially deadly threat to American Samoa and the Cook Islands, which are shown as small grey dots.

At the time this image was acquired, Olaf was a strengthening Category 4 cyclone, with steady winds of 135 knots and gusts up to 165 knots. Nancy was beginning to weaken with winds of 85 knots and gusts of 115 knots. The strongest winds, shown in pink, circle the center of the storms. Even without any sort of interaction, the two large storms could pack a dangerous one-two punch to the island nations of the South Pacific.

Additional images of the storms are available in the Natural Hazards section of the Earth Observatory.