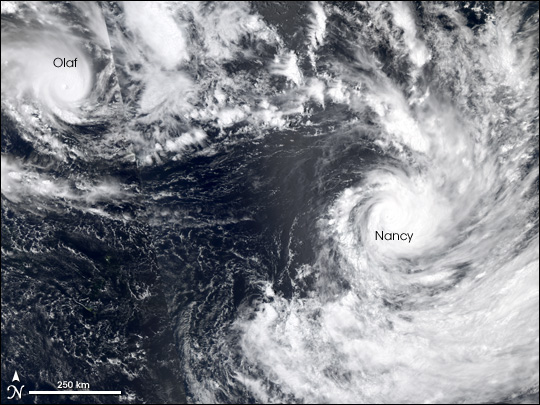 A strengthening Cyclone Olaf and a weakening Cyclone Nancy eye each other across the South Pacific in this Moderate Resolution Imaging Spectroradiometer (MODIS) image from February 15, 2005. As of the afternoon of February 15, Olaf was approaching Category 5 status, with sustained winds of 135 knots and gusts up to 165 knots. According to the Joint Typhoon Warning Center, waves were estimated to be as high as 47 feet. Although Nancy was a Category 4 storm in its early stages, by February 15, the storm had weakened. Sustained winds were 85 knots, with gusts up to 115 knots. Wave heights could be as high as 27 feet. Unlike Olaf, Nancy was predicted to weaken as it moved south over subsequent days.

Predicting how two powerful storms will interact as they approach each other is a difficult task. Although it is unlikely that the two storms would join together “eye-to-eye,” to form a single massive storm, it is likely they could influence each other's speed and direction. When two storms are within about 1,000 kilometers of each other, their trajectories begin to be influenced by the large-scale atmospheric circulation of the other. For example, if one storm is much stronger than the other, the weaker storm may be tugged off course by the powerful processes that are drawing air into the larger storm. In some cases, this can result in one storm seeming to “orbit” the other. The interaction is called the Fujiwara effect, after a Japanese meteorologist who first described it.

This image was made by combining observations form the Moderate Resolution Imaging Spectroradiometer (MODIS) on NASA’s Terra and Aqua satellites. The part of the image that shows Cyclone Nancy was captured by Aqua MODIS, while the part that shows Olaf was captured by Terra MODIS.