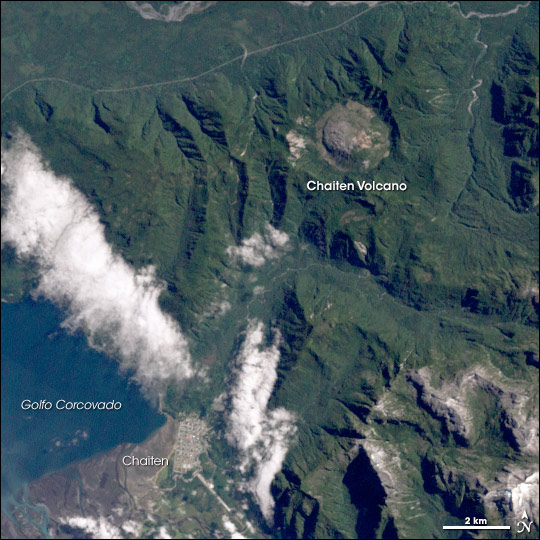 On May 2, 2008, Chile’s Chaitén Volcano erupted, sending plumes some 30 kilometers (18.6 miles) skyward, and blanketing some nearby areas in as much as 1.5 meters (5 feet) of volcanic ash. In the week that followed the initial eruption, local authorities established an evacuation zone with a radius of 50 kilometers (31 miles) around the volcano, warning holdouts that they would be evacuated by force, if necessary.

On February 21, 2000, the Enhanced Thematic Mapper on NASA’s Landsat satellite captured the volcano in a state of calm. In this image, the volcano’s caldera appears as a pale brown crater inside an ocean of lush green vegetation that covers the mountainous region. To the southwest is the nearby coastal town with the same name as the volcano. The satellite’s view is obscured only by the occasional cloud.

The tranquility of the volcano apparent in this image has been the norm throughout recorded human history. The May 2008 eruption was a surprise—Chaitén’s first eruption in more than 9,000 years. Even when a volcano has been active in recent history, the surrounding areas often provide good reasons to settle, including fertile soils and milder climates arising from high altitudes (at least in the tropics).