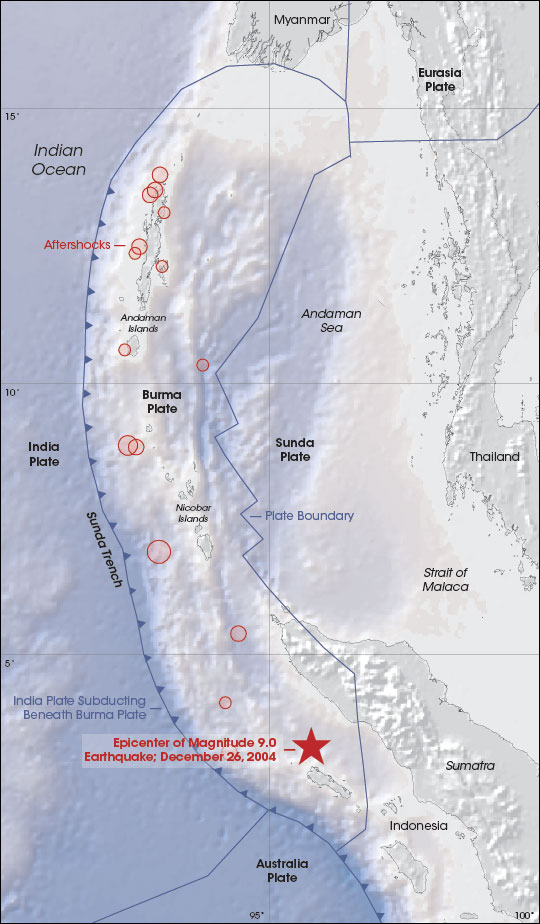 The Earth’s solid surface floats on a layer of softer rock as a collection of interlocking, movable puzzle pieces called tectonic plates. At 7:58 a.m. (local time), on December 26, 2004, beneath the Indian Ocean west of Sumatra, Indonesia, pent-up energy from the compressional forces of one tectonic plate grinding under another found a weak spot in the overlying rock. The rock was thrust upward, and the Earth shook as a 9.0 magnitude earthquake sent its vibrations out into the ocean. Tsunamis spread out in all directions; the massive waves washed over islands and crashed against coastlines in Sri Lanka, Southern India, and even the east coast of Africa. Tens of thousands of people were killed; millions are homeless.

The image above shows how the tectonic puzzle pieces fit together around Indonesia. The epicenter of the recent quake is marked with a red star in the image. It is located just to the east of the Sunda Trench, where the India Plate begins to get subducted beneath (forced under) the Burma Plate. The blue arrows along the plate boundary show the direction of subduction.

As the India Plate slides beneath the Burma Plate, it meets pockets of resistance, which causes compressional forces to build up. Weakened overlying rock gets forced upward. Based on the location of aftershocks (red shaded circles on the image), the United States Geological Survey reports that approximately 1,200 kilometers of the plate boundary probably slipped as a result of the quake. The initial rupture was likely more than 100 kilometers wide, and probably produced an average vertical displacement along the fault plane (the slope along which the two plates meet) of 15 meters.

When the bottom of the ocean is deformed by this type of “megathrust” quake, the upward force acts like a fist rising up from underwater. Water rolls down off the sides of the “fist,” creating massive waves that can travel as fast as an airplane. The waves can move across the ocean and barely disturb the surface, but when they reach shallow coastal water, the earthquake’s energy thrusts them tens of meters into the air. The tsunami created by this earthquake reached India and Sri Lanka in about four hours. The wave eventually reached Africa, the Pacific Ocean, Hawaii, and the west coast of North and South America.

For more information about this earthquake and plate tectonics, visit the Website of the USGS.