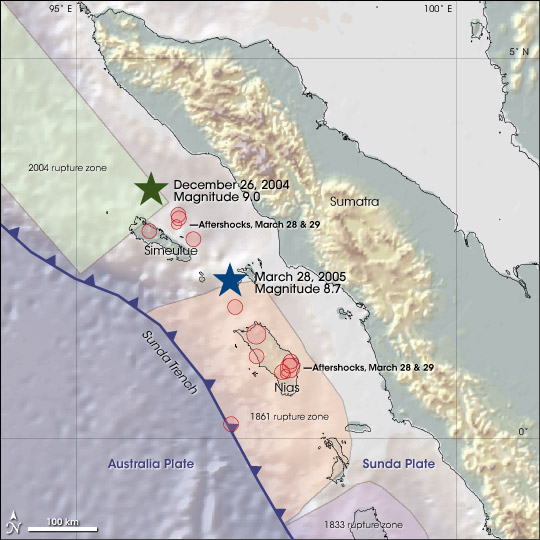 A magnitude 8.7 earthquake rattled northern Sumatra, Indonesia, on March 28, 2005, at 11:09 p.m., local time. At least 330 people are dead, but Indonesian officials expect the toll to soar over 2,000. The earthquake was centered 160 kilometers southeast of the 9.0 quake that triggered the devastating December 26,2004, tsunami, between the islands of Simeulue and Nias. The most severe damage appears to be on Nias, where large parts of the city Gunungsitoli were destroyed.

The United States Geological Survey reports that the March 28 quake occurred on the same fault that triggered the December 26 earthquake, probably as a result of stress placed on the fault by the first quake. The above map shows the locations of both earthquakes off the northwest coast of Sumatra. The March 28 earthquake occurred in a section of the fault just south of the part of the fault that slipped on December 26. The last time this section of fault moved was in 1861, when a large earthquake triggered a fatal tsunami.

According to the Pacific Tsumani Warning Center, sea level readings taken after the March 28 earthquake show that a small tsunami was generated, but there have been no reports of damage. Why did the 9.0 earthquake generate a massive tsunami compared to the small wave that came out of the most recent earthquake? By USGS estimates, both earthquakes occurred about 30 kilometers (18.6 miles) beneath the Earth’s surface, but the March 28 quake was much smaller and probably didn't displace the same amount of earth as the December 26 quake.

For more information about this earthquake, please visit the USGS Earthquake Hazards Program.