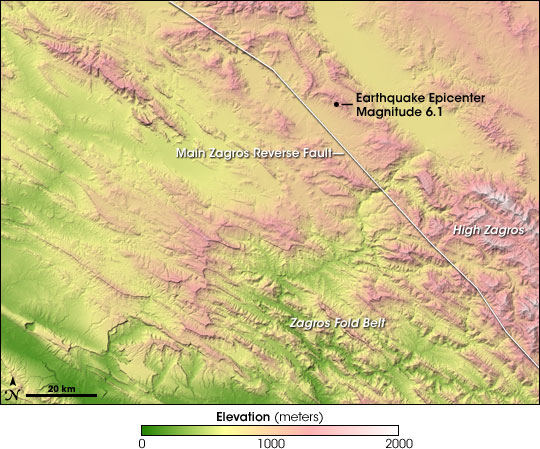 Just before dawn on March 31, 2006, a strong earthquake struck near Silakhor, Iran. The magnitude 6.1 earthquake killed at least 66 people, injured at least 1,280, and damaged buildings in 330 villages surrounding the epicenter. It is likely the death toll would have been much higher if residents had not been warned by a series of weaker foreshocks. This shaded relief image shows the topography of the earthquake region. Low elevations are green, with yellow, pink, and white representing progressively higher elevations. The earthquake was located 7 kilometers (about 4 miles) beneath the surface. Although the earthquake fault can not be seen on the surface, the topography hints at the geology of the region.

Iran is located on top of the collision zone between the Arabian Plate (to the southwest) and the Eurasian Plate (to the northeast). A reverse fault (a fault in which land on one side is pushed up during earthquakes) called the Main Zagros Reverse Fault divides the two plates. The Arabian Plate is moving northwards at 25 millimeters (1 inch) a year (about the rate fingernails grow), compressing the Eurasian plate. Earthquakes release the pressure created as the two plates grind together. Over millions of years the collision raised the Zagros mountains over 4,000 meters (13,100 feet), and shifted river valleys more than 50 kilometers (31 miles).

The Silakhor earthquake occurred on a section of the Main Zagros Reverse Fault called the Main Recent Fault. The Main Recent Fault separates the accordion folds of the Zagros Fold Belt (lower left) from the High Zagros (upper right). The Zagros Fold Belt is a region of sinuous parallel mountain ranges created by the compression of the margin of the Arabian and Eurasian Plates, similar to the folds created by pushing the edges of a fabric sheet together. In contrast, the High Zagros are comprised of a block of the Eurasian plate that has been uplifted by the oncoming Arabian Plate. Stresses created by this earthquake will likely lead to more quakes nearby in the coming decades.